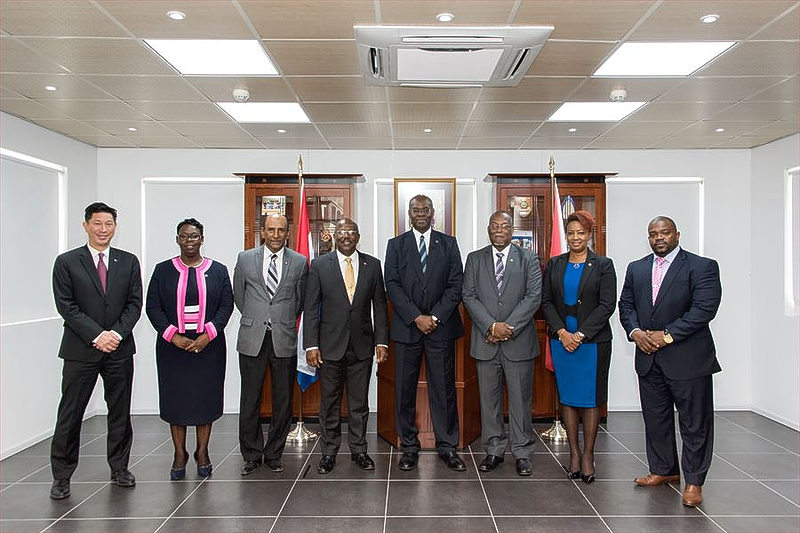 Members of the Council of Ministers and Governor Eugene Holiday (file photo).

HARBOUR VIEW–Members of the Marlin II Cabinet tendered their resignation on Thursday, following the passing of a motion of no confidence in six of the seven ministers and has submitted a draft national decree to call elections and to dissolve parliament by the end of January 2018.

Governor Eugene Holiday said in a press release on Thursday evening that he received a letter from Prime Minister William Marlin on November 2, making the portfolios of the Ministers and the Minister Plenipotentiary available and tendering the resignation of his entire cabinet. “This resignation takes place as a result of the vote of no confidence, passed by Parliament on November 2, 2017,” Holiday said.

The Governor said he informed the Prime Minister that he will take the resignation request into consideration pending the formation and installation of a new interim government.

Holiday said he also received from the Prime Minister, a draft national decree to call elections and dissolve Parliament by the end of January 2018. Holiday called on the Ministers to handle the daily operations of government and to continue working with him in the interest of St. Maarten until a decision has been taken concerning the request for resignation.

“Considering the above and the willingness of a new majority to form a new government, Governor Holiday will start the consultations round to explore the formation of a new interim Cabinet today, Friday November 3,” the release stated.