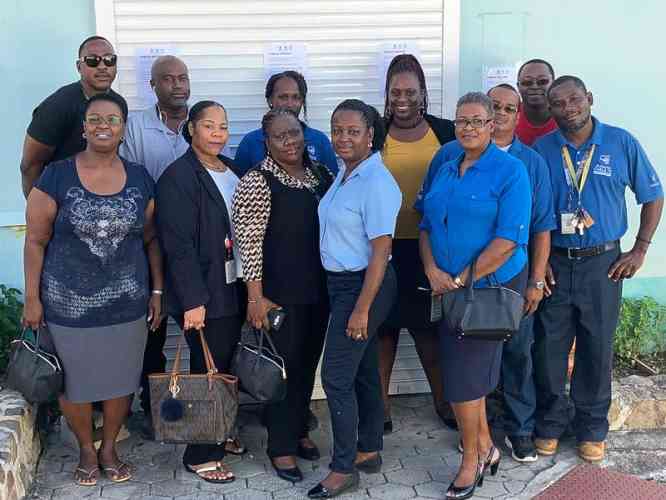 MADAME ESTATE–St. Maarten Cable TV workers who showed up for work on Tuesday were greeted by closed doors and were unable to enter the building, a move their union says was a “lockout” by management that is in contravention of last week’s Court ruling.

However, TelEm Group’s Chief Executive Officer (CEO) Kendall Dupersoy denies that workers were locked out. He said the company, which took over ownership of Cable TV in October 2016, had initially taken a decision that Cable TV in its present form would be dormant as of January 1. The current temporary closure is in keeping with that plan.
St. Maarten Communications Union (SMCU) President Ludson Evers told The Daily Herald the union had won its injunction against the TelEm Group and that verdict outlined the steps the company now has to take. However, he said when the workers showed up to work on Tuesday they found the offices closed and none of the workers or the union had received any communication from management about the closure.
The union said it followed the necessary steps and was in contact with the Government mediator for information on why the office had been closed.
When contacted for comment, Dupersoy said the initial plans had been to discontinue Cable TV in its present form and incorporate its services into TelEm. He assured that TelEm plans to adhere to the Court verdict and a manpower assessment will be conducted. The Court verdict did not say that the Cable TV office had to remain open, Dupersoy said.
“We are prepared to do what the Court ordered which is to have a manpower assessment done. Maybe it would be best to do this so that the workers of Cable TV and the union can see for themselves that we don’t need as many of the workers as they may think we need,” he noted.
Dupersoy said the Cable TV office will remain closed temporarily until the manpower assessment has been completed “and we see what we can do from there.”
Terms of reference were expected to be completed on Tuesday and sent out requesting quotations for the manpower assessment. Clients are advised to pay their bills and to seek customer service at any TelEm location. If the existing TelEm branches cannot handle the customer service and the payments from existing Cable TV clients, then management might consider reopening the Cable TV office in Madame Estate as a branch office.
Following Hurricane Irma, the number of Cable TV clients dropped from 6,000 to 2,000. Some persons cancelled their subscriptions because they had no roofs, and some had no service due to the damage the Cable TV network suffered during the September hurricanes.
Asked whether workers had been informed about the closure, Dupersoy said that because the verdict had been received late on December 28, the company unfortunately had not had time to discuss the matter with its attorney and had not been able to inform Cable TV workers in a timely manner.
He assured that all workers will continue to be paid until a decision is rendered by the Department of Labour on the company’s dismissal request. The company was told that it will receive a decision on its request on March 1.
“A few” of the St. Maarten Cable TV workers have since accepted the termination packages offered by the company and the TelEm group is currently finalising contracts for the local television station to continue its operations moving forward.
Dupersoy said it was “unfortunate” that things had to happen this way. “It was supposed to be a more smoother transition for everyone, but Irma came (almost four) months ago and communication is not what it used to be with union and workers,” he said, noting that he had stopped by during a get-together of the workers recently and had spoken and explained certain things about the process to them.
“It was due for them to have this information. I don’t know what the manpower assessment will say, so I am waiting on that,” he said.