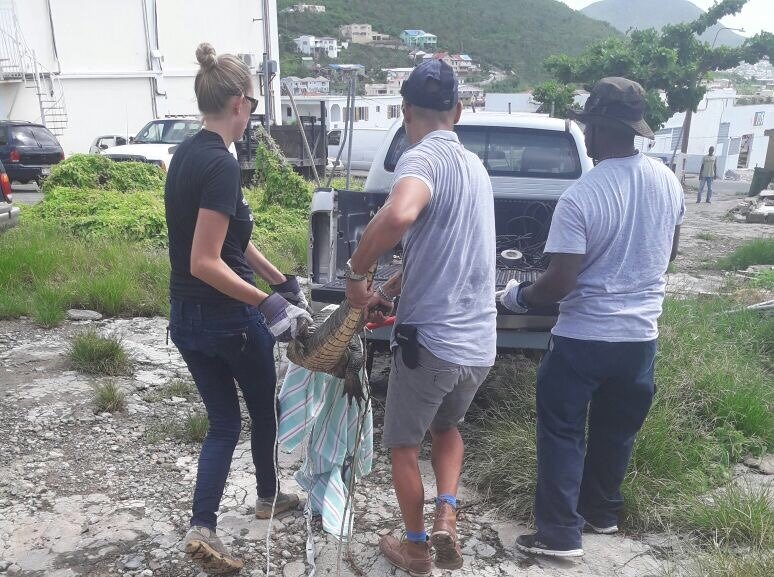 SAUNDERS–A neighbor in the Saunders area noticed an alligator-like animal close by while fixing water pipes at the back of his home on Tuesday. Terrified, the man contacted Animal Defenders who in turn contacted Nature Foundation to come and remove the dangerous animal.

The groups arrived at the location after they were called in and saw that the animal was a caiman, not a crocodile or alligator. It was caged near the property next door and the owner of the property informed the groups that the animal belonged to him. The man said the animal has never attacked anybody. The Nature Foundation contacted the district’s community police officer to intervene in the case.
The community police officer contacted the prosecutor and according to the laws of the land; residents are not allowed to harbor wild animals, especially if those animals can be a threat to the public.
Police spokesman Chief Inspector Ricardo Henson said in a press release Wednesday that on the scene, the police had discovered an approximately five-foot-long crocodile which was being kept in a concrete water reservoir. S.B., the owner of this wild and very dangerous animal, stated that he has owned the animal for approximately 30 years. He informed police that he did not have permission from the local authorities to ship or to own such a wild animal.
Nature Foundation Manager Tadzio Bervoets told The Daily Herald he had no idea on how to remove the animal when he first saw it. “I contacted some people in Jamaica who know about removing caimans and they gave me tips on what to do. I got the equipment from the Vet Clinic and we managed to remove the animal and place it in a safe location. The caiman was well fed and was about 6½ feet. The animal could have escaped from the cage it was in, as it was not fully secured,” he said.
The animal will be transported to a zoo off-island, according to the Foundation.