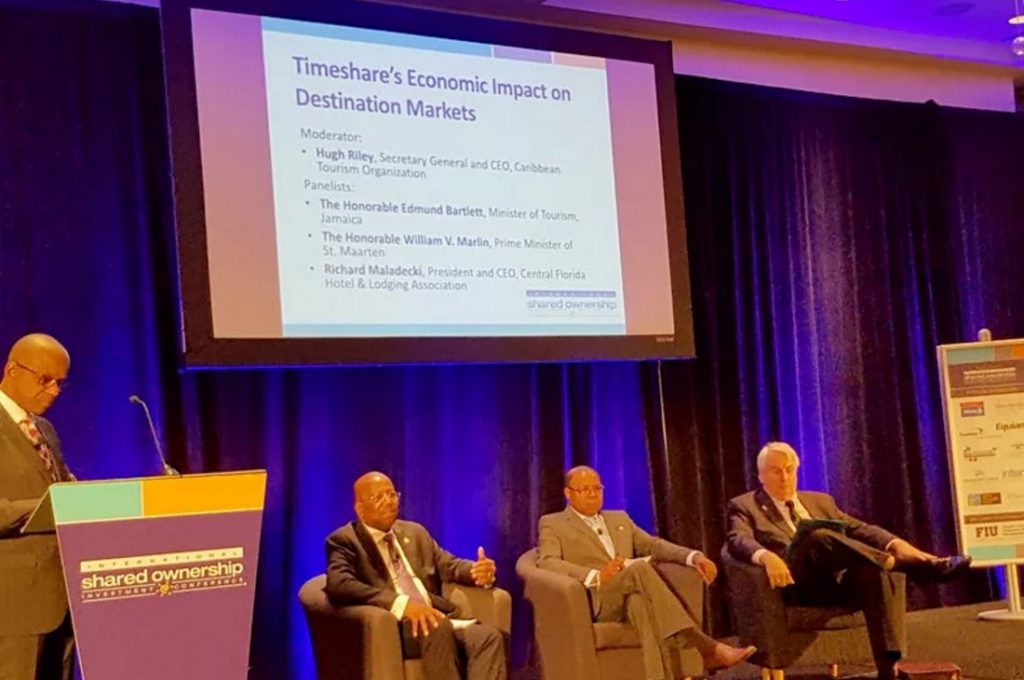 MIAMI, Florida–Timeshare’s economic impact on destination markets along with the disruption caused by newer additions to the shared economy – Airbnb and Home Away, were discussed at the International Shared Ownership Investment Conference that ended on Wednesday on Eden Roc Miami Beach Resort and Spa.

On the panel discussing timeshare’s economic impact was Prime Minister William Marlin. He shared for industry leaders St. Maarten’s draw to timeshare developers and owners. The destination, one of the oldest in the timeshare sector, has the highest number of repeat timeshare owners in the region, he said according to statistics provided by St. Maarten Timeshare Association (SMTA).

Timeshare owners with St. Maarten units also have a higher average yearly income than the rest of the region.

Marlin told attendees at the Interval International hosted conference the average income for a St. Maarten timeshare user is around US $147,000 per annum compared to the regional average of US $124,000 per annum. That statistic translates into major economic benefits for the country as timeshare owners have a higher average expenditure per day than traditional hotel users.

Overall, timeshare pours about US $500 million annually into the local economy, said Marlin.

Jamaica Tourism Minister Edmund Bartlett described his destination as “young, new, fresh … and open for business” – that is timeshare business. Jamaica has only recently entered this sector of the tourism market and has passed timeshare regulation earlier this year.
Timeshare, Bartlett said, is key to diversifying the economy, a sentiment echoed throughout the conference. It allows destinations to capture more tourism dollars.
The Caribbean may “suffer the risk of becoming a mature destination,” said Bartlett. To mitigate that risk, there is constant and imminent need to “refresh and reinvent” the region’s tourism product. “Timeshare fills the gap … Timeshare is a good opportunity to refresh and innovate.”

There are threats to the timeshare and traditional hotel sectors with the growing popularity of Airbnb and Home Away.

The “disrupters” in the shared economy such as Airbnb, must be engaged, said Bartlett, who added, “Bring them to the table.” And he is doing exactly that by meeting with representatives of Airbnb who will be in Jamaica next month.
Bartlett’s focus is not on curbing the growth of Airbnb, but to ensure his destination’s product is not negatively impacted or degraded by unregulated units.

The home sharing accommodation service had some 2,000 listings in Jamaica. St. Maarten has some 130. But even that small number means a loss of room tax for Government’s coffers. Airbnb listings are not in the traditional tourism sector thus operate without the scrutiny of Government regulations.

Marlin and Bartlett were not concerned about the competition for airline seats between traditional hotel stayover visitors and timeshare owners. Their viewpoint was as long as there are bodies in the seats heading to the destinations it is good for the economy.
Central Florida Hotel and Lodging Association President and CEO Richard Maladecki was also on the panel and gave insights into Central Florida’s ever growing timeshare sector.