Home Local News Canada’s PM tells how Antiguans could get visa-free access to his country... 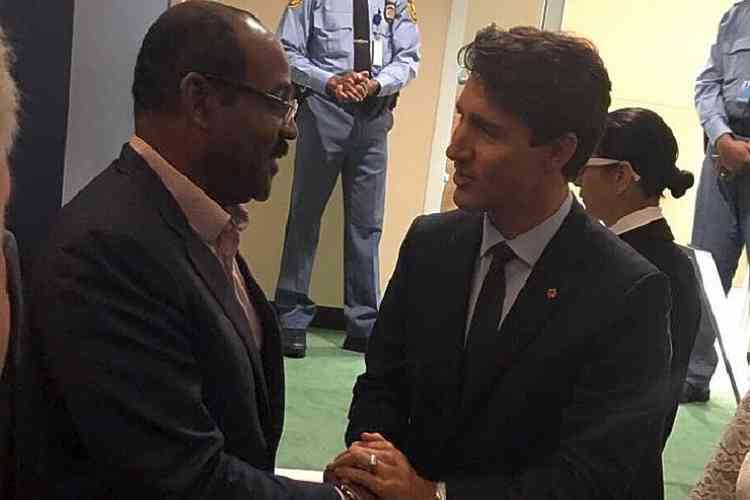 ST. JOHN’S, Antigua–Citizens of Antigua and Barbuda could get visa-free access to Canada once again if the standard of the twin-island nation’s economic citizenship programme is lifted, Canadian Prime Minister Justin Trudeau says.

And the Gaston Browne administration is seeking to find out exactly how it can do that.

In June last year, the Government of Canada imposed the visa requirement, saying that Antigua and Barbuda “no longer meets Canada’s criteria for a visa exemption.” Browne subsequently said in a statement the decision related to concerns over persons who obtained passports under Citizenship by Investment Programme (CIP) in the Caribbean.

At a town hall meeting in Canada, Trudeau said Antigua and Barbuda’s CIP did not meet high enough standards. He was responding to a question from a member of the audience – a citizen of Antigua and Barbuda – about what could be done to repair her country’s relationship with Canada and whether it would require the termination of the CIP.

“We have fairly stringent criteria in Canada around security, around ensuring the travellers who came to Canada are who they say they are, and we have pretty high expectations of countries that do not require visas to come to Canada. And what we found in Antigua and Barbuda and in other countries was there wasn’t the level of stringency and analysis done to satisfy our high standards on immigration and border control to allow us to continue to have visa-free access for citizens of Antigua and Barbuda,” the Canadian leader said.

“We will always ensure Canadians stay protected and if countries like Antigua and Barbuda make the significant improvements and changes necessary to their programmes, we could then look at lifting the visa requirements. I’m just not going to compromise Canadian security.”

Prime Minister Browne has written to Trudeau, seeking direction on how to strengthen the CIP to restore the visa-free access.

At the same time, he defended the integrity of the programme.

“Since I am not aware of the depth of Canada’s standards for border control and security, I am unable to comment on whether our very intense vetting system somehow fell short of meeting Canadian standards. However, I am obliged to point out that our system involves four levels of stringent vetting of applicants, before approval, including by Interpol [International Criminal Police Organisation – Ed.] and the Joint Regional Communications Centre in which the relevant agencies of Canada participate,” Browne wrote in the January 13 letter.

However, the Prime Minister also extended an invitation to the Canadian Government to “review our programme without restraint and make recommendations for implementing improvements that would satisfy Canadian standards.” ~ Caribbean360 ~