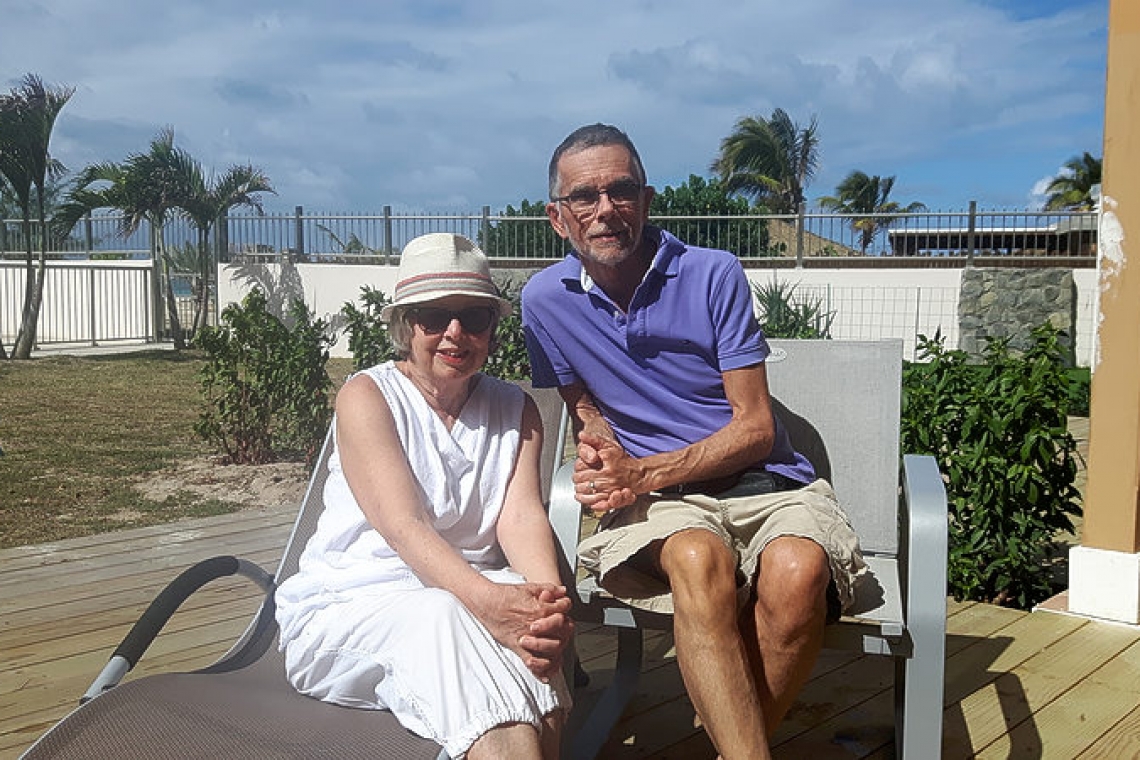 Ted and Carolynn Fairhurst at their apartment in Orient Bay Village.

MARIGOT–Ted Fairhurst is keeping fingers crossed that his flight out of the island on Westjet on Sunday, March 22, to Toronto will take off as planned, barring any unforeseen last-minute calamity, and crucially that he and his wife will get a seat, not get bumped, and pass the health screening. The flight is said to be full and they have a confirmed reservation.

Still, the anxiety is palpable given the fact from Monday there is no guarantee any airline will fly in to repatriate any tourists left behind, even though it’s understood the airport will remain open.

The COVID-19 threat has ratcheted up the anxiety level with both island governments taking unprecedented measures to prevent the virus from getting a foothold. Strict rules on confinement in place and closure of bars and restaurants, have brought daily life and routines to an abrupt halt, leaving the island on a virtual shut-down.

The retired couple from Toronto, both age 73, arrived on the island on February 23 and were supposed to be staying until April 9, but like other tourists have seen their vacation plans disrupted. They are staying in a condominium in Orient Bay Village.

“We have trip interruption coverage on our insurance so we are hoping to get some compensation for the remaining two weeks of the vacation we can’t use,” Ted explained in a “social distancing” phone call. “We were going to stay for four days in Simpson Bay but had to cancel that, losing our deposit and we had to change the Westjet flight, essentially buying a new ticket for US $800. Then we will hope to get compensation for the three weeks’ unused part of the rental car agreement, either from the car rental company or our insurer.”

Despite the setbacks, the couple has been enjoying the island.

“I must say our condo has a lovely swimming pool and we have been able to go to the beach to walk and swim. Gendarmes were around with a loudspeaker telling people they have to have that document in their possession. Our landlord got that arranged for us. The restaurants in the square of the village are closed, except for take-outs, I think. But the grocery store Petit Casino is open and a bakery is open for take-out.”

The couple has vacationed on the island for five or six years consecutively and is particularly pleased with their condominium in Orient Bay Village which has been completely rebuilt after Hurricane Irma’s storm surge tore through beachfront properties.

“We like the north side of the island and the great thing is when you have been here a few times you start to know your way around and the places to go,” Ted added. “We came here in March 2018, for three weeks and it was very quiet then. I’m sure we will be back next year when this is all over.”

St. Martin Tourism Office Director Aïda Weinum said the Tourism Office in conjunction with hotel association AHSM was doing a count of tourists left in hotels and would have a final count this morning, Friday. Hotel guests have been urged to check with their airlines all week.