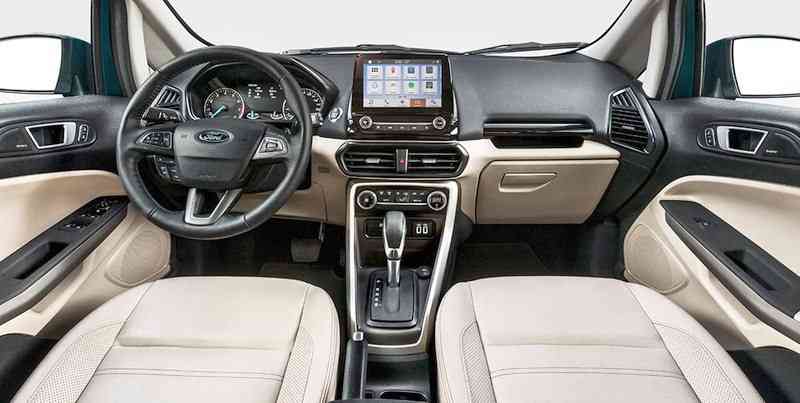 The interior of the vehicle.

“We stay abreast of the automotive trends in order to bring the best and most innovative models to our market. Ford has made major strides to enhance the design and the durability of its vehicles. The All-New 2018 Ford EcoSport is more feature-loaded than ever, with a facelift that brings a lot of meaningful improvements offering good looks matched to solid build quality,” Caribbean Auto Managing Director Tariq Amjad said in a press release on Monday.

“The car is much quieter than before and very fun to drive.”

According to the release, every inch of the All-New Ford EcoSport is redesigned to help drivers “go further,” do more, get anywhere and make the most of their island life. “With a bold new design, the EcoSport looks like it’s ready for action on the roads. Because it is,” the release said.

The All-New EcoSport combines three new engine options and a revised silky-smooth six-speed automatic transmission to make every ride a fun experience. It is powered by a new Dragon 1.5L Ti-VCT engine for its Ambiente models and a powerful all-new 2.0L GDI Ti-VCT (167 HP, 170Nm torque) petrol engine in the trend and titanium models.

Caribbean Auto Managing Director Tariq Amjad gives the thumbs-up sign near one of the vehicles.

“There is also the world-award-winning spirited Eco-Friendly 1.0L Fox EcoBoost Turbo engine with tons of torque available in the Titanium Model, for those who value fuel efficiency as their number one priority. At the front, the New 2018 Ford EcoSport gets a new redesigned chrome grille, new projector headlamps with LED daytime running lights and angular fog lamps. The car also gets a new front bumper with prominent lines and new tweaked-out front bonnet design.

“If we look at the side profile, the new Ford EcoSport gets revised mirrors, larger elongated roof rails and a new set of alloy wheels that provide an aggressive stance to the car. From the back, the new version gets a redesigned tailgate and standard full-colour housing for its popular rear-mounted spare tire. The new EcoSport looks sportier than ever before.”

The All-New EcoSport has a redesigned and premium cabin featuring goodies such as a 8.0-inch infotainment system. This system allows the driver to always stay connected with the All-New EcoSport’s enhanced SYNC® 3 system, which seamlessly integrates smartphones.

With the added value of a five-year warranty and a wide range of appealing new colours, not only can drivers go further in the All-New EcoSport, there is also an ongoing campaign that provides “attractive prices and finance packages” to ensure that customers can “Afford A Ford,” the release said.

Caribbean Auto urges consumers to stay tuned for more details during an upcoming EcoSport launch campaign which will include activities for persons to experience the All-New 2018 Ford EcoSport. Additional information can be obtained by contacting Caribbean Auto at tel. 544-5211, or via Facebook Caribbean Auto St. Maarten/St. Martin.