Home Local News Caribbean Flag Fest is back for Carnival 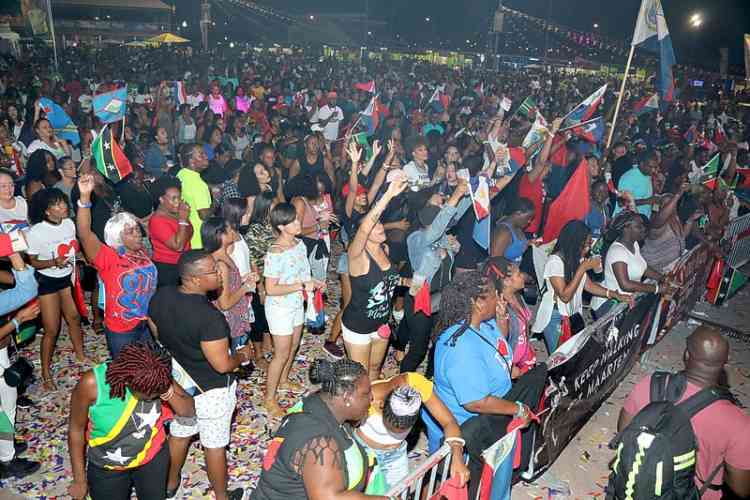 The crowd at the 2017 Caribbean Flag Fest. (Andrew Dick photo)

PHILIPSBURG–One of the most sought-after and well-attended shows of all Carnival seasons is back with another great line-up of bands for this year’s Carnival. The 78 Inc. Entertainment Foundation in collaboration with Carib Beer will present the fourth annual Caribbean Flag Fest on April 22 to kick off the best weekend line-up for Carnival 2018.

This year’s concert features Better Band Reunion out of Rainbow City, Anguilla; Onyan Effek out of Antigua; the Original Bouyon Pioneers from the land of many rivers, Dominica; Small Axe Band out of Sugar City, St. Kitts; BDj and Daddy Jones and the crew out of the Virgin Islands; and St. Maarten’s very own local homegrown Da BiG BaD XP Band out of Sunshine City/Friendly Island – St. Maarten.

The deejay of the night will be the Riddim Master himself, DJ Vybz, and the host will be 2017 Soca Rumble Power Monarch King Vers. Carib Beer will host various “Caribbean Flag Fest Pop Ups” where various prizes can be won at selected supermarkets prior to the event.

Tickets are on sale for US $25 in advance or $35 on the night. Tickets can be found at: Van Dorp in Simpson Bay and Madame Estate, SXM Promotionz, UTS stores, Tech Hub in Carrefour Bush Road, Wings and Things at Abu-Ghazi in Madame Estate and Booth #12 after the official opening of Carnival Village.

The minimum age limit to attend Caribbean Flag Fest is 15 years and you are required to show an ID if requested. Gates will open at 7:00pm and show begins promptly at 8:00pm.

The 78 Inc. Entertainment Foundation members and team thanked all sponsors thus far, in particular Winair and Chippie (UTS), which have been on board since inception, and Carib Beer which came on board in the second year as sponsor of the Caribbean Flag Fest and continues to support the event.

The Foundation thanked Small Island Massive, all bands, artistes, DJs and MCs who have been part of Caribbean Flag Fest over the years and especially the Flag Fest fans and supporters near and far for their continued support and attendance.

For more information go to Facebook.com/78inc .