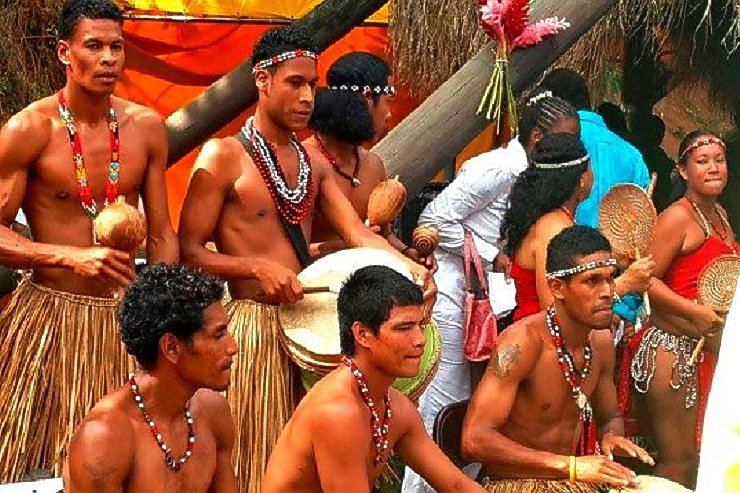 BELIZE CITY, Belize–The Caribbean’s indigenous people have called for being given a seat at the political table so as to safeguard their rights to their ancestral lands and resources.

The call for political representation for the minority first peoples of the region is one of a slew of recommendations on health, education, gender, sustainable livelihoods, land rights and access to justice, drafted after three days of deliberations by the leaders and representatives of indigenous peoples from six Caribbean Community Caricom nations at a historic University of the West Indies (UWI) conference of indigenous peoples. Host country Belize is home to more than 50,000 Maya and Garifuna peoples, roughly one-10th of the population.

The conference, organised by UWI IMPACT Justice, a Canadian-funded project to improve access to justice in the Caribbean, has been hailed as a rare, unique and historic gathering of the region’s indigenous peoples and a recognition of the need to redress centuries of degradation and discrimination.

“The Indigenous People should have a seat at the table,” said Louis Patrick Hill, a representative of Dominica’s Kalinago chief, who is a former senator in the US Virgin Islands legislature. “They have very little representation at the levels of government because of the political party system that exists in most of the Caribbean and Latin American countries, and because the indigenous peoples are a minority in those countries we find that the political representation is almost not there.”

The conference proposed New Zealand’s model of representation for its indigenous Māori people, which reserves seats for representatives of Māori in Parliament. Each electoral district is covered by both a general and a Māori electorate.

“It is something that the governments in the region could study to see how indigenous peoples acquire and achieve true representation in the development progress so their voices are heard, … their issues are always front and centre and they have ability to actually make a case for the issues that confront them,” Hill continued.

Beyond direct political representation, the conference also called for a formal consultative process which gives voice to indigenous peoples’ rights and concerns in the clash with governments over exploitation of their lands.

“We highly recommend … a very extensive, formal consultation with the peoples who are being affected and for whom solutions are being proposed,” said Laura George of Guyana’s Amerindian Peoples Association.

At the level of international law, there was a call for Caricom governments to ratify Convention 169 of the International Labour Organisation (ILO), considered the most important international law guaranteeing the rights of indigenous peoples. The 1989 Convention depends on a high number of states ratifying it to give it greater power. So far, only a score of nations worldwide have adopted the Convention.

Dominica, which ratified the Convention in 2002, is to date the only Caricom member state to do so.

George also urged the indigenous people to examine the existing commitments made by Caricom member states in the regional and international treaties they have ratified, including the Revised Caricom Treaty and the Convention on Biodiversity as they affect indigenous peoples’ rights.

“Member States have signed on to the Sustainable Development Goals. It might be very broad but I think it’s very key … to truly work towards identifying the challenges of indigenous peoples’ rights … to their resources and the lands and the waters, and to hold governments accountable as a unified body of indigenous peoples.”

“This forum has truly created a space where we could work and come together and work towards our indigenous peoples’ civil society to really push for government and the states to work to protect and define, to respect indigenous peoples’ rights to [their – Ed.] lands and resources.”

George said the notion of pre-informed consent and consultation with the indigenous peoples’ communities, a concept adopted by Guyana’s newly formed Hinterland and Indigenous Peoples Commission, has not yet been identified at the Caricom level as the “way to go.”

One of the working groups formed during the Conference to make recommendations for follow-up action on social policy also identified a litany of setbacks, deprivations and discrimination that has led to further marginalisation of indigenous people.

It cited a loss of oral history, the absence of a written history and an education system marked either by limited access or irrelevance to indigenous people.

“Make education programmes relevant to the needs of indigenous peoples,” said Belizean Garifuna Alexandra Seale, a founding leader of the Divine Feminine Circle of Indigenous Elders. “[There is – Ed.] the need for more research and the need to teach the languages of the indigenous [peoples – Ed.] and also to protect the archaeology and findings of ancestral remains.”

The Conference recommended that proposals be addressed directly to the Caricom Council of Ministers of Education for an improved curriculum. “The best way to shortcut [to – Ed.] the changes in education is go through the Caribbean Examinations Council, and I think this is something that we should all try to do,” Seale, one of the working group presenters, added.

Cristina Coc of the Toledo Alcades Association, a group of Mayan traditional leaders in southern Belize, made an emotional appeal for recognition and respect for the first peoples of the region.

“The Mayan people developed high rises. Our cities had high rises but they were taught to us as ruins, not temples, as our ancestors had them,” said Coc.

“It is important that we rethink the way we conceptualise the very notions that we’ve deliberated on for the last two-and-a-half days; that we celebrate ourselves as opposed to separate and condemn our own civilisations, and we start that process by speaking our truth,” she added.

The UWI Conference was notable for the participation of two justices of the Caribbean Court of Justice (CCJ), Adrian Saunders and Jacob Witt. Last year, the CCJ upheld the land rights of the Mayans of southern Belize.

The meeting was also attended by the highest ranking Amerindian in the Guyana Government, Vice President Sydney Allicock, along with Attorney General Basil Williams and Indigenous Peoples’ Affairs Minister Valerie Garrido-Lowe. They were joined by a host of academics and experts in law, environmental conservation and geographical information technology from the Caribbean, Canada and the US.

As the Conference opened, Justice Saunders suggested that obtaining justice, not government programmes, was the best route to improving the lives of the region’s indigenous peoples. Amounting to roughly 10 per cent of the populations in Belize, Guyana, Suriname, Dominica, St. Vincent and the Grenadines, and Trinidad and Tobago, they have been beset by centuries of exclusion, denial, discrimination and disproportionately high poverty rates.

They include a host of Amerindian nations in Guyana and Suriname, the Kalinago of Dominica, and Carib communities in St. Vincent and the Grenadines. Southern Belize is home to around 50,000 Mayans and Garifuna, a mixed-race group of Caribs and Africans who were driven from their Vincentian homelands in 1797 by the colonising British and exiled in Belize. ~ Caribbean360 ~