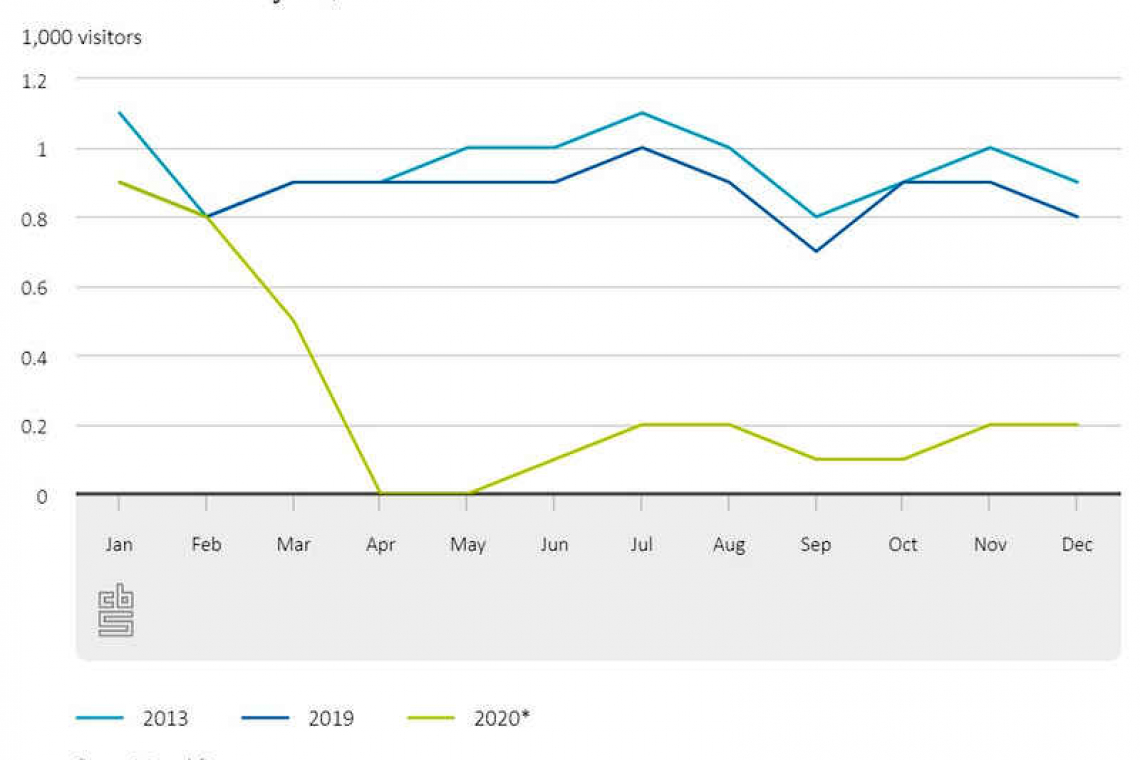 SABA/ST. EUSTATIUS–Tourism in the Caribbean Netherlands was heavily impacted in 2020 by the measures and flight restrictions due to the COVID-19 pandemic. The number of visitors who flew to St. Eustatius and Saba last year was down by 69 and 67 per cent, respectively, relative to 2019. In Bonaire, 58 per cent fewer visitors arrived by air, it emerged from figures released Tuesday by the Central Bureau for Statistics (CBS).

Visitors still flew to the Caribbean Netherlands in the first two months of 2020. On March 14, 2020, Bonaire, St. Eustatius and Saba closed their airspace to inbound passenger traffic from Europe and other high-risk countries.

Visitor numbers in Statia in January and February 2020 were similar to those in 2019. The number of visitors dropped in March and subsequently did not exceed 200 per month.

There were 69 per cent fewer visitors arriving by air over 2020. This amounted to 3,300 visitors, down from 10,500 in 2019. The decrease in visitor numbers was largest in the second quarter of last year at 96 per cent. However, the third and fourth quarters of 2020 also saw substantially lower visitor numbers compared to 2019, at 81 and 80 per cent lower, respectively, the CBS said.

Last year’s visitors to Statia mainly came from St. Maarten, Aruba or Curaçao (around 31 per cent) and from the European Netherlands (around 22 per cent). Residents of the United States and the Dominican Republic accounted for 10 and seven per cent of all visitors, respectively. These percentages are similar to those of 2019. The decline in visitor numbers has affected all nationalities equally.

The number of visitors to Saba in January and February 2020 was still similar to the number for the same period in 2019, until tourism came to a halt after the introduction of the COVID-19 measures.

From June through November 2020, visitor numbers did not exceed 100 per month. Approximately 200 visitors arrived in December. For the whole year, the decline in the number of visitors arriving by air stood at 67 per cent.

Like the other islands in the Caribbean Netherlands, Saba also experienced the largest drop in visitor arrivals in the second quarter of the year (94 per cent), with substantially lower numbers in the third and fourth quarters as well compared to 2019, at a decline of 86 and 87 per cent, respectively.

Most visitors to Saba were Americans (around 27 per cent), followed by citizens of St. Maarten, Aruba and Curaçao (around 21 per cent) and the European Netherlands (approximately 19 per cent). There were also relatively many visitors from Canada at approximately seven per cent. Compared to 2019, particularly fewer European Dutch nationals came to Saba in 2020.

Bonaire received 66,000 visitors last year compared with nearly 158,000 in 2019, which is a 58-per-cent decrease. Visitor numbers were still up in January and February, by 6.7 per cent relative to 2019. There was still an upturn in July and August 2020 due to a relaxation of the measures, but the number of visitors remained far below the level of 2019. Bonaire received slightly more visitors again in December.

The decline in Bonaire’s visitor numbers was strongest between April and June 2020 at 97 per cent year-on-year. According to the World Tourism Organization (WTO), a similar decline was seen for the Caribbean region as a whole.

The visitors who came to Bonaire in 2020 were mainly European-Dutch nationals (around 43 per cent) and visitors from Aruba, Curaçao and St. Maarten (around 23 per cent). US citizens accounted for a significant part of the visitors as well, at around 16 per cent. Due to flight restrictions, the share of Americans decreased in particular relative to 2019, by nine percentage points.

2020 was a difficult year for cruise tourism as well. The number of cruise passengers to Bonaire in January and February still grew by around 22 per cent relative to the same months in 2019. After the COVID-19 measures took effect in mid-March, cruise traffic stopped and did not pick up again for the rest of 2020. As a result, the number of cruise passengers calling at Bonaire was approximately 62 per cent lower in 2020 than in the previous year.