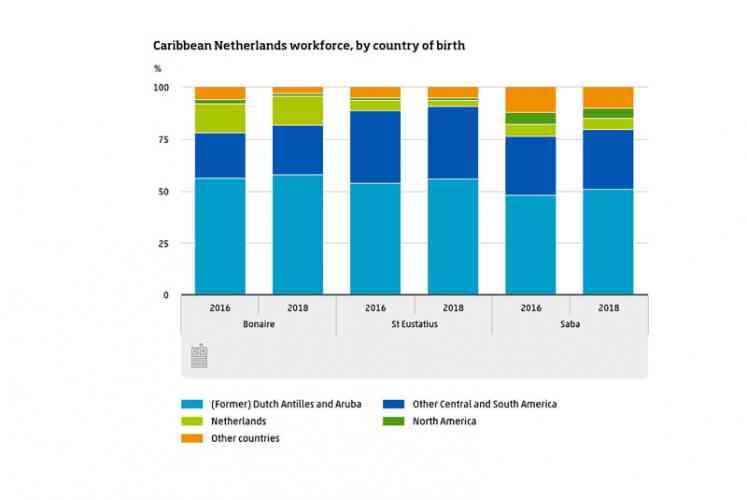 Graph shows islands on which “Antilleans” were born.

BONAIRE/SABA–In 2018, 57 per cent of the employed labour force (ages 15 to 74) in the Caribbean Netherlands were born in the (former) Netherlands Antilles and Aruba. On Bonaire, this was 58 per cent, on St Eustatius 56 per cent and on Saba 51 per cent. This is shown by the latest figures from the 2018 Labour Force Survey (LFS) conducted by Statistics Netherlands CBS.

Employers in the Caribbean Netherlands are required to make a number of mandatory efforts to fill their vacancies with local employees. Only when this is unsuccessful, they may hire staff from elsewhere outside the islands. No work permit is required for native Dutch persons from Aruba, Curaçao, St Maarten or Europe, nor for Americans. The work permit requirement does apply to people from any other country, although a few exceptions are made in certain lines of work.

In addition, the percentage share of Central and South Americans rose on all three islands; Bonaire saw a relatively sharp rise by two percentage points to 24 per cent in 2018.

The share of European Dutch persons among the workforce of Bonaire remained unchanged, and is still considerably larger than on the two other Caribbean Dutch islands. On Saba, which has an American medical university, there is also a relatively large share of US origin.

Central and South American persons working in the Caribbean Netherlands are relatively often found in technical and service occupations. Examples are construction workers (27 per cent) or cleaners (12 per cent). Just under five per cent work as a waiter or bartender.

On Bonaire, 19 per cent of the workforce are found in technical and 15 per cent in service occupations. The respective shares for such occupations among Central and South Americans there are 38 and 26 per cent; for St. Eustatius, the shares are 35 and 20 per cent and on Saba 27 and 27 per cent.

A relatively large share of the employed persons on Bonaire who were born in the European part of the Netherlands work as managers, in (health) care and welfare, or in education. Ten per cent of the workforce are found in either care or welfare occupations; 6 per cent in teaching occupations and 6 per cent in management occupations. Among the working population of European Dutch origin, the respective shares are 16, 12 and 11 per cent.