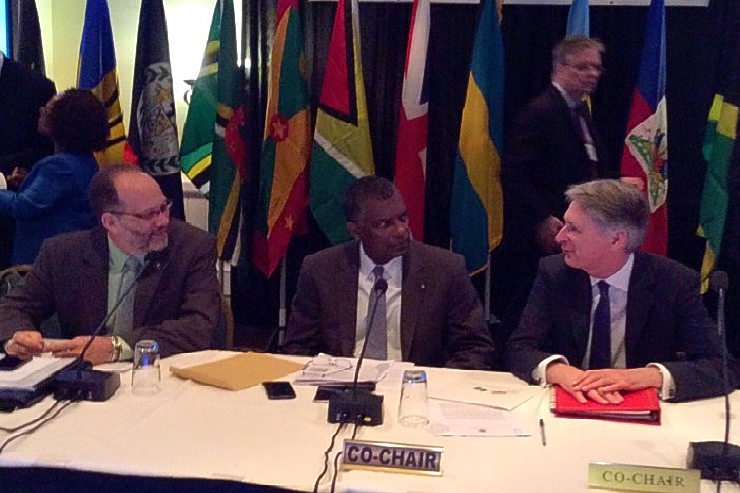 GRAND BAHAMA, Bahamas–The UK has reaffirmed its continued commitment to the sustainable development of the Caribbean region, pledging to increase development support over the next four years to the tune of 360 million pounds sterling (US $521 million) in grant-finance.

The UK’s commitment to the region was renewed during the Ninth UK-Caribbean Ministerial Forum, recently concluded in Freeport, Grand Bahama, the Bahamas. The Joint Communiqué emanating from the Forum, held under the theme, “Building a Stronger Partnership for Sustainable Growth and Development,” defines the broad-ranging areas of collaboration, and includes cooperation on global tax transparency, correspondent banking issues, renewable energy and health. The UK is keen on forging closer cooperation in the areas of economic growth and job creation, tackling crime and corruption, climate change and natural disaster management.

Acknowledging the significant progress made in UK-Caribbean relations since the last Forum in June 2014, the parties agreed on the promotion of trade and investment in goods and services, exploiting the favourable terms for market access to Europe provided by the Economic Partnership Agreement (EPA). In this context, they agreed that advancing trade and investment brings to bear a concomitant need for actions to eliminate barriers to trade, as well as the exchange of best practices, expertise and experience to build human resource capacity, given its critical importance to investment.

Within this context, there was a commitment for the two parties to work together in sourcing additional technical assistance from international institutions such as the United Nations, the Commonwealth Secretariat, the Organisation of American States, the Caribbean Development Bank (CDB), the World Bank, the Caribbean Community Caricom, the Inter-American Development Bank, the University of the West Indies and other relevant institutions to build human resource capacity for trade and investment.

The region re-emphasised to the UK the need for increased awareness of the inherent vulnerabilities of small-island developing states to exogenous economic and financial shocks. It underscored that efforts to secure special consideration in mobilising concessional financing are rendered difficult by the challenges of “graduation” and “differentiation” resulting from their classification as Middle Income Countries (MICs). Foreign Ministers from the region also noted the high level of indebtedness of some Caribbean countries, including the efforts they are making on debt-restructuring, and the challenges faced in finding resources to develop resilient infrastructure, to engage in reconstruction after natural disasters.

Against this backdrop, the UK has pledged to continue its 300 million pound infrastructure support programme announced in 2015 for specific countries and underscored its willingness to continue to provide grant support to the Special Development Fund of the CDB.

Discussions on economies also centred on continued collaboration on international financial rules and global standards on tax transparency. Noteworthy for the region was the UK’s commitment to work with the European Union (EU), G20 and the Organisation for Economic Cooperation and Development (OECD) to facilitate effective dialogue between established and emerging financial centres, in recognition of the need for increased Caribbean participation in rule-making processes that affect their economies.

The region also maximised the opportunity to express to the UK its deep concern over the threat posed to the financial stability of Caricom Member States by de-risking by the global banks which have resulted in the withdrawal, restricted access to, or higher cost of correspondent banking services to the Caribbean banking sector.

“The indiscriminate termination of correspondent banking relations is a worrying development that now threatens the region’s economic stability and capacity to remain properly integrated into the global financial, trade and economic systems. Given the important role that the financial sector plays in the growth and development of a country’s economy, these actions have negative implications for economies in the region, including in the areas of remittances, payment of pensions, and financing of trade facilitation. The Caribbean therefore called on the UK to continue to work with international partners to address this global phenomenon, and to encourage banks which provide correspondent banking services, and regulatory authorities, to take into account the efforts being made by Caribbean countries and financial institutions to implement international regulations and to mitigate risks,” the Communiqué stated.

In the area of renewable energy, the parties acknowledged the abundance of natural resources in the region, along with the need to build energy independence in the long term and significantly reduce its dependence on fossil fuel. In this regard, the UK and the Caribbean agreed to deepen their collaboration to accelerate the development of renewable and sustainable energy solutions in the region.

“The UK reaffirmed its commitment to working with its partners in the Caribbean to develop a long-term strategy to secure energy supplies from a mix of sources and to pursue technical exchanges between both sides as a matter of urgency, and to encourage public, private and academic partnerships between the UK and the Caribbean to develop alternative energy sources and solutions,” the Communiqué stated. ~ Caribbean360 ~