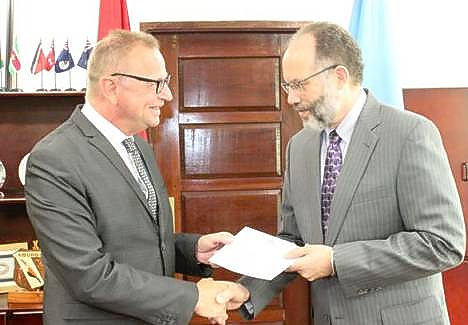 GEORGETOWN, Guyana–The Caribbean Community Caricom and the Kingdom of the Netherlands on Wednesday renewed a mechanism for diplomatic cooperation with the accreditation of a new envoy to Caricom, Jules Bijl.

In a ceremony at the headquarters of the Caricom Secretariat on January 18, 2017, Caricom Secretary-General Irwin LaRocque said the community was keen to learn more of the Dutch experiences in a range of areas; these include environmental protection, water management, disaster management, renewable energy, agriculture, food processing, as well as chemical and port infrastructure.

Caricom was also eager to boost trade, tourism, cultural and human resource development exchanges within a cooperation programme that the Netherlands had signalled it was interested in developing, LaRocque said.

When Bijl delivered his remarks, he indicated those areas in which the kingdom hoped to expand its cooperation. They include climate change, disaster risk management, security, sustainable development and employment.

LaRocque underscored the importance of access to development financing in pursuit of the 2030 Development Agenda and Paris Climate Change Agreement. For small-island and low-lying coastal developing states SIDS, their peculiar vulnerabilities must be factored into the criteria for access, he noted.

Knowing how vulnerability negatively impacts sustainable growth and prosperity, he told Bijl that Caricom countries will persistently decry being labelled as non-cooperative tax jurisdictions. “Ambassador there is documented proof including by the relevant globally recognized institutions of our efforts and successes in respecting the onerous regulatory obligations that govern the financial services sector.

“We have grave concerns over the disturbing trend of international banks withdrawing correspondent banking services. This is negatively affecting our ability to conduct international financial transactions and, by extension, trade and remittances for our people,” LaRocque said.

Bijl expressed appreciation for the region’s support of the Netherlands’ successful candidacy of a temporary seat in the United Nations Security Council (UNSC).

“We would like to thank Caricom for its important contribution that saw our election… The Kingdom is committed to be the partner of the Caricom countries in the UNSC and we look forward to working with you on issues of common interest,” he added.

In this regard, he said the kingdom was interested in learning more about the development of the regional strategic plan based on the ideals of the Samoa pathway and the UN/s Sustainable Development Goals (SDGs). Noting that the kingdom viewed the community as a platform to fulfil its promises to the region, he said the Netherlands could also be an advocate for SIDS to the UN.

“Our Kingdom’s SIDS makes us realise how vulnerable we are in the Caribbean,” Bijl stated, referring to Curaçao, Aruba, St. Maarten, St. Eustatius and Saba in the Caribbean Sea.

Curaçao, Aruba and St. Maarten have applied for associate membership of the Caribbean Community. These applications are being actively considered in the context of an enlargement policy that is being formulated.

Bijl noted that the Netherlands believed in the value of their territories integrating their policy efforts with the countries and organisations in the Caribbean. In this regard, he said the kingdom strongly supported the applications for associated membership to Caricom. “We would be very happy to contribute very soon, actively to Caricom,” he stated.