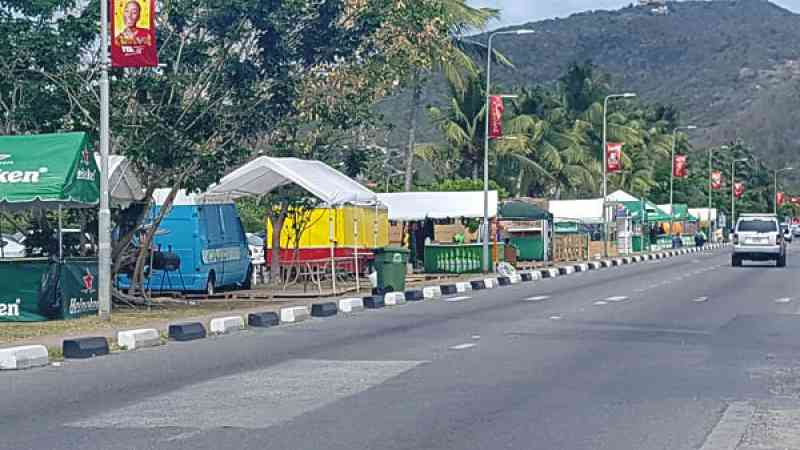 Carnival vendors on Walter Nisbeth Road during the 2018 Carnival season.

PHILIPSBURG–Vendors who will be catering to visitors and Carnival-lovers during the upcoming Carnival season are now allowed to stay open until 2:00am, instead of 12:00am as announced by the permit department in March.

Minister of Economic Affairs Stuart Johnson announced the change to the permit stipulation on Wednesday.

“The initial closing time of 12 midnight was taken based on feedback from the police department under the Ministry of Justice. Considering, that there never should be any compromise to safety and security, the decision was taken for 12 midnight.

“Shortly after the announcement, the outcry of some individuals did not fall on deaf ears and further discussions took place in regard to the closing time of the Carnival vendors on the Pondfill area. After discussions with the Ministry of Justice, it was decided to adjust the closing time to 2:00am,” stated Johnson.

“As it pertains to the Carnival celebrations, I would like to strongly suggest to all relevant stakeholders that the enjoyment of Carnival 50 depends on upholding their individual responsibilities. While I understand the workload for all involved, we must not forget what Carnival represents, which is the largest cultural event in our country.

“I am calling on all businesses to decorate your establishment in celebration of Carnival, which would further enhance the Carnival spirit for locals and visitors alike. It would also demonstrate a level of confidence and support to our largest cultural event. … And, of course, this should be the practice moving forward annually.”

He said he remained confident that the hard work of the troupe leaders, revellers, bands, artistes and St. Maarten Carnival Development Foundation (SCDF) does not go unnoticed.

“In doing so, I do hope the Grand Parade and Second Day Parade do not become a marathon. Troupe leaders have spent countless hours preparing their troupes for the road, Revellers have spent their money to enjoy playing mas on the road,

“So, if the Grand Parade and Second Day Parade take until after sunset to finish, let it be so. Allow the resident and visiting spectators, … local, regional and international media the opportunity to embrace the special road events and take pictures and record footage. After all, don’t we want them to return year after year for Carnivals yet to come? After all, we want them to get their money’s worth after all they invested to come here on a leisure trip to celebrate with us,” Johnson concluded.