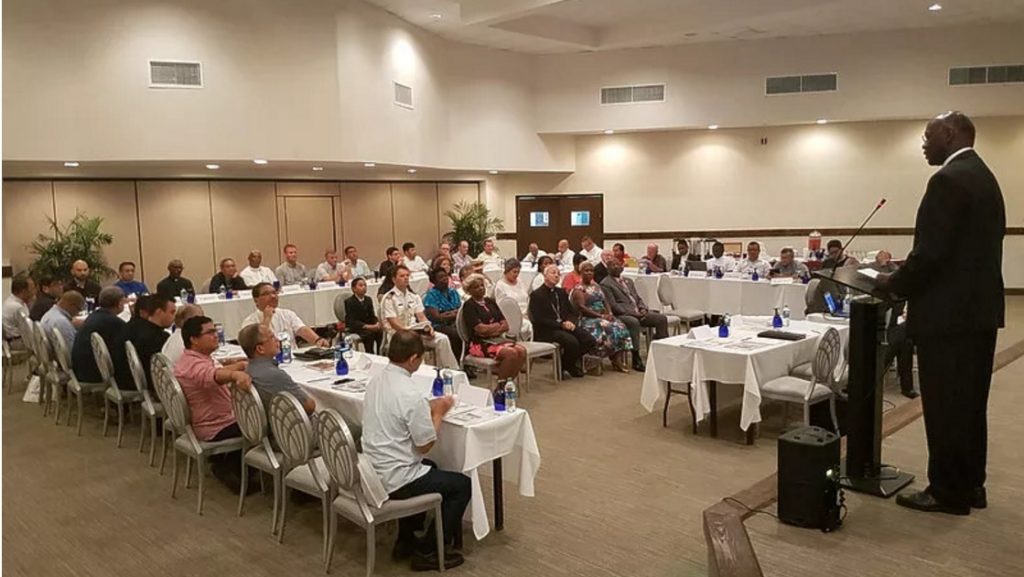 PHILIPSBURG–Members of the Catholic clergy from around the Dutch Caribbean were given an insight into the futures they impact via the Church’s commitment to education when the St. Joseph Primary School Choir serenaded them on Monday afternoon with song, including “This little light of mine.

The 40 priests and three deacons along with Monsignor Luis Secco, Bishop of Willemstad and St. Maarten Parish Priest Father Adam Oleszczuk, are gathered in St. Maarten for the Annual Clergy Conference in Sonesta Great Bay Beach Resort, Casino and Spa.

This year’s theme – “A Church in the mission of mercy” – ties into the message of the Pope for 2016.

Holiday, in his opening address, said the theme reminds everyone – clergy and layman – of responsibility as individuals, Christians and as a community to reach out to each other in as many helpful ways as possible.

He pointed out that “acts of mercy” is the foundation upon which public institutions are built as these aim to better the lives of people.

The Church has done same through its care for sick and elderly, those in need and via education, he said, adding the Church’s outreach in the field of education and caring “has shaped the lives of many.”

In the field of education, Holiday, who was accompanied by his wife Marie-Louise, shared that he was a beneficiary having attended St. Joseph Primary School.

Prime Minister William Marlin commended the gathered clergy for coming together to do God’s work, share experiences and talk about activities in this year of mercy as proclaimed by the pontiff. Their mission is “not an easy one,” he said.

Marlin added that the clergy could not have chosen a better time to hold the conference here as the country marks 175 years of the establishment of the Catholic Church here.

The men of the cloth were encouraged by the Prime Minister to find some time to do sightseeing and a little shopping here while spreading the word of God.

Marlin too pointed out his ties to Catholic education as a past teacher at St. Joseph Primary School.

Bishop Secco said it was indeed a gift to back on St. Maarten for the conference as well as “to absorb the culture and faith in God” as demonstrated by the country.

The Bishop also noted that the six Dutch islands “have diversity in language, but united in one faith.” This sentiment was echoed by Father Oleszczuk.

The clergy was called on to “be inspired for years to come” from the discussions of the conference by master of ceremonies Wally Havertong.

The St. Maarten Song at the start of the conference, organised by the Diocese of Willemstad, sung by young Peter Surita, who is also an altar boy at Mary Star of the Sea Catholic Church in Simpson Bay.

Each day the conference will close off with a Holy Mass at the various churches with the opening mass in St. Martin of Tours Catholic Church.