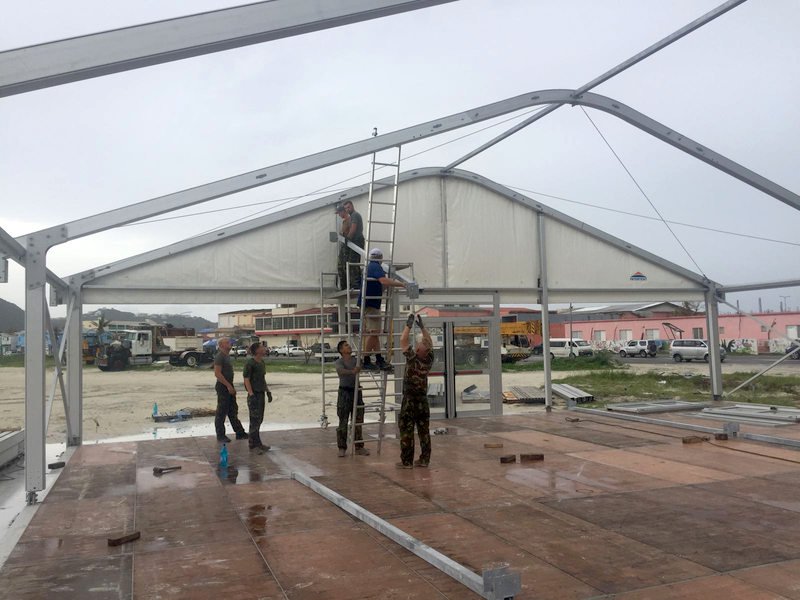 One of the pavilions on the ring road.

PHILIPSBURG–Charlotte Brookson Academy (CBA) for the Performance Arts, St. Maarten Academy and the Methodist Agogic Centre-Comprehensive Secondary Education (MAC-CSE) will be using three pavilions for temporary classrooms until repairs to their respective schools have been completed.

The pavilions arrived in St. Maarten aboard the Karel Doorman on its first trip to the country and were part of the relief items from the Netherlands.   The construction of the first of four pavilions began on the ring road Monday, October 16. The pavilions were given to the schools that sustained the most damage and were left without classrooms or an alternate location, the Ministry of Education, Culture, Youth and Sport (ECYS) stated in a press release on Monday.

The pavilions are being constructed by representatives of Intertent (the manufacturer of the pavilions), the Marines, the GENIE group of engineers, the VROMI Ministry and local contractors.

Intertent representatives Frits de Boer and Jeroen Harlaar were deployed to St. Maarten to assist in the safety of the construction of the pavilions. Four more Intertent representatives will be arriving in the country in the coming days to assist with the other pavilions, which will be placed in Ebenezer near MAC-CSE and partially on the land of the former Prins Willem-Alexander School for Special Education for St. Maarten Academy. All pavilions will be strategically placed nearby the main campus to cater to students and to facilitate the rotation of classes, it was stated in a press release.

CBA representatives were at the ring road to witness the construction of the pavilions. The representatives of the school “were very thankful” to ECYS Minister Silveria Jacobs and the Ministry for allowing them to use the pavilions. CBA was housed at the old Government Administration Building, which was severely damaged during the passage of Hurricane Irma, rendering it unusable for the school. Exam and pre-exam classes are now being held at University of St. Martin (USM) and the Philipsburg Cultural and Community Centre.

Jacobs has been working closely with school boards to ensure the schools have all necessities to assist in the smooth transition back to school, the release said.