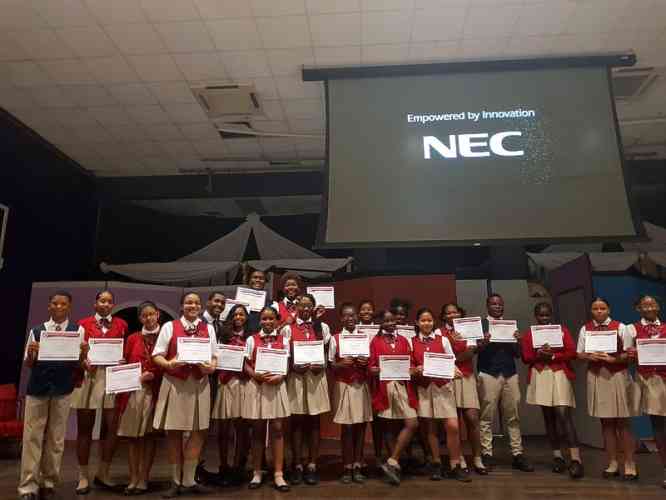 The group of awardees.

PHILIPSBURG–Charlotte Brookson Academy (CBA) of the Performance Arts students, who had captured a place on the institution’s honour roll as a result of their outstanding performance during the second term of the 2018-2019 school year, were recognised during the school’s weekly assembly on Monday, April 1.

These students had attained an average of 80 per cent or more on their second term report cards. The honourees totalled 21, twenty of whom received second honours and one student who received first honours, which go to students with a 91-per-cent average or higher.

Recognised at the assembly was also student Tyreke Arrindell, who was awarded the title of Student of the Month of March 2019. This title went to Arrindell for his unwavering dedication to his work and his exemplary behaviour towards management, staff and his peers. The ceremony was witnessed by several parents of the honourees.

Students each received a certificate from their home room teacher and were commended for their efforts by the Student Care Coordinator; Director, as well as the Parent Teachers Association (PTA) President.

Special mention was made of Chanel Almonte, a sixth-year student, who received first honours. Throughout her high school years Almonte has consistently been an honour student. This academic year she is adding to her list of accomplishments the fact that she is completing a three-year syllabus in the subject of Physics in one year. CBA does not offer the Physics subject and since Almonte is desirous of furthering her studies in the field of pharmaceuticals, she needed to add this subject to her other Science subjects.

A Science teacher was acquired from another high school this year, who has been tutoring Almonte, assisted by both science teachers at CBA, when their schedules permit.

CBA’s Board Foundation, management, teachers and other members of staff at the school wished students and their parents continued success as the school prepares its students for the Caribbean Examinations Council CXC, the Caribbean Certificate for Secondary Level Competence (CCSLC) and final exams at the end of the third term.