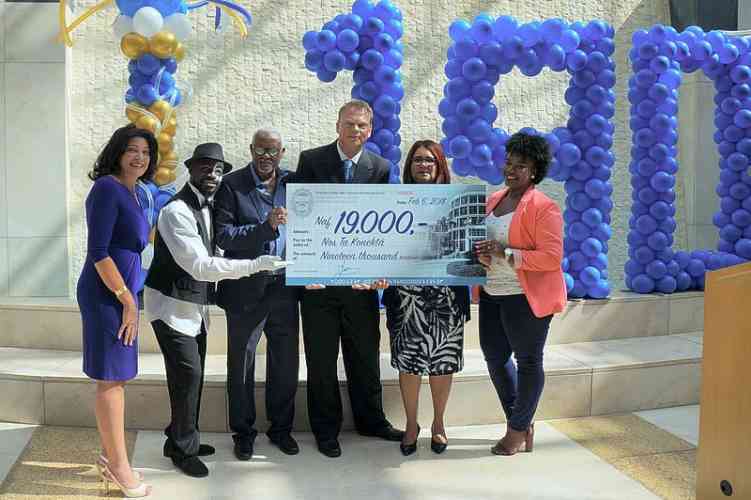 From left: Mime-player Marlon Rog, an employee with the most years of service at the bank and CBCS Acting President Leila Matroos.

To mark the occasion, CBCS decided to make a donation to Philipsburg Jubilee Library in St. Maarten and Nos ta Konektá in Curaçao. The Library will receive its donation at a later date. The amount to be donated to the Library was not mentioned in a press release issued by the CBCS on Tuesday, as it wants this to be a surprise.

According to the release, Nos ta Konektá, which received a symbolic cheque for NAf. 19,000, is a project of Stichting Curaçao Open, which aims to provide children ages 12-17 years in deprived neighbourhoods in Curaçao with courses in computer and Internet use, digital literacy and dealing with information.

Computer skills are becoming increasingly important in today’s digital era, CBCS said. Children of low-income families often do not have electronic devices at home nor access to the Internet. This results in a digital gap that deprives this group of equal opportunities for development, work and a future. CBCS said it was “proud” to make a contribution to the good work done by these organisations.

King Willem I of the Netherlands gave orders in 1828 to establish a bank that had to create order in the chaotic financial situation in Curaçao and the dependent islands. The main task of the bank was to provide loans to merchants to stimulate the islands’ economy. Hence, the name “Bank der Leening” (Bank of Loans). The bank was located in Fort Amsterdam and was part of the Department of Finances.

The bank has been through many changes in the 190 years of its existence. When the first commercial banks started their activities on the island, the bank allocated its commercial activities and focused on supervision.

When the bank reached its 125th anniversary in 1953, the staff consisted of one secretary, one cashier, one courier and four administrative employees. Today, the CBCS works with more than 200 professionals who together ensure the stability of the guilder and a sound financial sector.

Furthermore, CBCS is the oldest still-operating circulation bank of the Americas and the Caribbean, the release said.