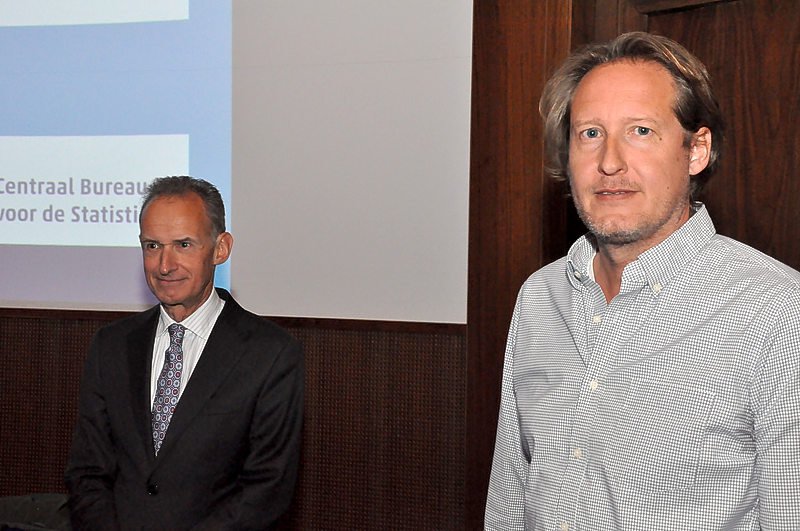 THE HAGUE–As a neutral organisation the Central Bureau for Statistics (CBS) doesn’t get involved in political discussions on the issue of poverty in Bonaire, St. Eustatius and Saba. Nonetheless, CBS Manager Henk van de Velden painted an interesting picture of the developments in the Caribbean Netherlands based on statistics of the past few years during a lecture on Thursday.

Van de Velden was the guest speaker of a very well-attended lecture at the Ministry of Home Affairs and Kingdom Relations BZK in The Hague on Thursday. Having just returned from a five-year term in Bonaire, Van de Velden analysed the economic and social-economic developments on the three islands based on the CBS statistics.

An interesting perspective of his presentation was his personal interpretation of whether things were better or worse since the islands became public entities of the Netherlands in 2010. Van de Velden noted that it was a good thing that after several years of steep increases of the consumer prices, the price hikes have become less extreme. The price inflation has more or less stabilised in the last two years.

The overall economic development in Saba has been positive: The population is growing, the low-income earners are better off with the significant increase of the minimum wage and the purchasing power generally increased. Also, the income gap is less in Saba.

In Statia the economic development has been negative in the past few years. The purchasing power of people, especially the low income earners has decreased.

Showing a number of statistics to the audience at the lecture, Van de Velden gave details about notable facts of these graphics. In Saba, for example, the demographic statistics are influenced by the presence of a large group of medical students on the island, which reflects not only on the age of the population and the place of birth, but also the higher average education level. Statia has a larger group with middle and low education.

Remarkable of Statia is that it has the highest average real income per household of the three islands. This is due to the presence of NuStar. Those with the highest incomes on the island progressed the most and were less affected by the decrease in spending power. The decrease of spending power has been the biggest in Statia of the three Caribbean Netherlands islands. This particularly affected the low income earners.

Unemployment is the highest in Statia and the lowest in Saba. Yet, Saba has a high number of persons who are inactive on the labour market. In Statia the number of people who consciously decide not to work is much lower.

Van de Velden did not touch on the specifics of the persistent poverty on the islands and the much-talked-about social minimum. The Dutch CBS, which expanded its working area to Bonaire, Statia and Saba in 2010, stays out of politics. But the organisation does provide statistics about prices, inflation and income which the governments can use in their policies and decision-taking processes.

The statistics that the CBS produces are highly valuable, said Director of Kingdom Relations of the BZK Ministry Erwin Arkenbout in motivating the choice to invite Van de Velden as guest speaker at the lecture series organised on a regular basis to raise awareness. “The objective data provided by the CBS are important to create a balanced view,” said Arkenbout.

Van de Velden explained how the CBS collected its data for its production of statistics. The job starts with the collection of raw data some of which is supplied by authorities such as the figures from the Census Office, the collective wage sheets, the arrival and departure figures, and the national accounts.

The CBS also regularly carries out surveys for research purposes. These surveys include the labour force survey, the so-called omnibus survey with a wide variation of topics, and the recently started Health Study Caribbean Netherlands, executed in cooperation with the Dutch National Institute for Public Health and the Environment RIVM.

Surveys are carried out on a bi-annual or multi-annual basis, and not too often as not to inconvenience the residents. “On an island like Saba with a very small population we invite about 50 per cent of the households to participate in order to secure survey results that are representative. That is why we only survey every two years, because otherwise it becomes cumbersome for the people,” said Van de Velden.

The CBS official lauded the increased cooperation with the statistics bureaus of Aruba, Curaçao and St. Maarten since February this year. The organisations are working on a Dutch Caribbean Statistical System. “We are uniting forces, which is a good thing,” said Van de Velden, who also announced the setting up of an Island Data Centre in Bonaire, in cooperation with the local government.