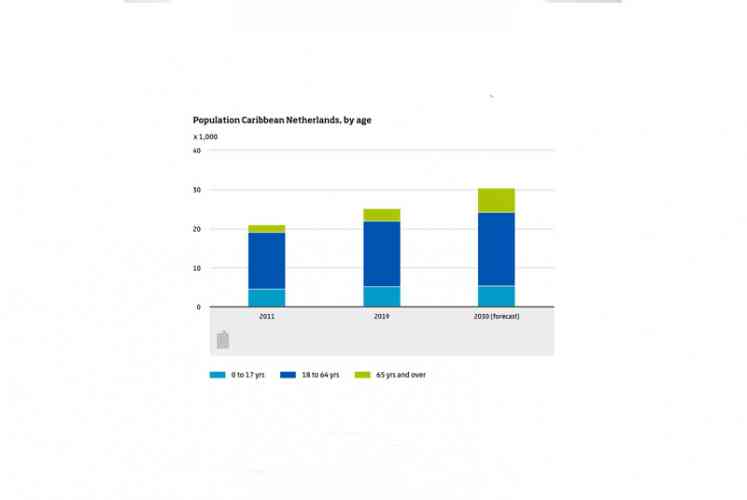 SABA/ST. EUSTATIUS–The population of the three islands of the Caribbean Netherlands is expected to grow further from the current 25,000 to 30,000 by 2030. This is primarily due to an increase in the number of older inhabitants, according to the latest forecast by the Central Bureau for Statistics (CBS) in the Netherlands.

The population forecast projects the most likely scenario for the future development of the population in Bonaire, St. Eustatius and Saba.

In this forecast, CBS uses a simulation model based on projections regarding birth rates, migration and life expectancy. However, especially migration developments are difficult to forecast, the organisation stated. If the number of migrants settling in the Caribbean Netherlands until 2030 is one-quarter lower than projected, the population will only go up to 28,000, but if the number is one-quarter higher, the population will continue to increase to 33,000, CBS said.

Since Bonaire, Saba and Statia became public entities in October 2010, their joint population has increased from 21,000 to 25,000. This increase is almost entirely attributable to the largest island, Bonaire.

At the start of 2011, 74 per cent of the population in the Caribbean Netherlands lived in Bonaire. This is expected to rise to 81 per cent by 2030.

External migration contributes more to the population growth in the Caribbean Netherlands than natural growth (births minus deaths) does. Since 2011, the number of immigrants settling on the islands stood at more than 1,900 annually, including more than 500 from the European Netherlands. Each year, nearly 1,600 emigrants left the islands.

There were more than 200 live births annually, while the number of deaths stood at more than 100. According to the forecast, slightly more children will be born annually until 2030, but also more people will pass away.

Slightly fewer immigrants are expected to arrive while fewer emigrants will be leaving. Net migration and net natural population growth are expected to be approximately the same as in the period since 2011, the CBS stated.

The number of elderly people has risen since 2011, and the CBS expects this trend to continue. The forecast projects that 20 per cent of the inhabitants will be over the age of 65 in 2030.

The proportion of minors living in the Caribbean Netherlands is approximately equal to that in the European Netherlands. Their number is anticipated to be more or less the same in 2030 as it is now.

The number of residents in the Caribbean Netherlands who were born in the European Netherlands has increased from 1,900 to 3,300 since early 2011. According to the forecast, this number is expected to go up to 4,600 by 2030.