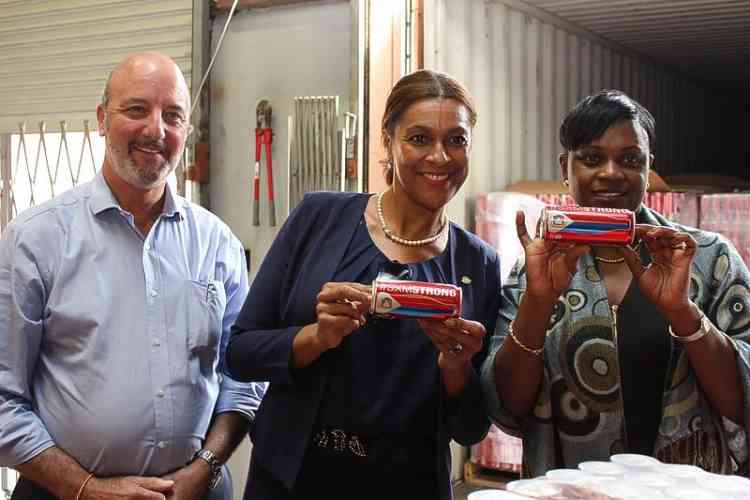 CAY HILL–CC1 on Monday launched the first batch of specially labelled Coca Cola cans, which have the words “#SXMStrong” emblazoned across the can and carry a picture of the St. Maarten Flag.

The first set of specially labelled cans was presented to Prime Minister Leona Romeo-Marlin and Minister of Education, Culture, Youth and Sports Jorien Wuite during the launching ceremony held at the company’s warehouse in Cole Bay.

CC1 General Manager Dominique De Tullio called the launch “an exciting moment” and said it was a celebration of the strength of the island and the resilience of its people.
“After the passing of Hurricane Irma, we wanted to do something to help our community and to show the world what we are about,” he told attendees at the ceremony, “and what better vehicle to get this message out there than this world-famous iconic brand Coca Cola. To put a message on that can, we will get that message out there. It’s a simple and strong message: #SXMStrong. In addition to that message we have also put another iconic symbol on the can and that is our flag which represents everything that we are.”

De Tullio said the St. Maarten Flag has become a symbol that many people from all parts of the world and from all walks of life are proud to see.

The first container of the cans was at the CC1 warehouse for the launch. De Tullio said another 10 containers are expected to arrive and a combined total of 480,000 of the specially labelled cans will be distributed around the island. He assured that the cans will be “snapped up” in no time by residents as well as by visitors to the island.

Persons who purchase the #SXMStrong cans will be supporting Hurricane Irma survivors, as CC1 will be setting aside US $0.50 from every case sold in a fund to donate up to $10,000 to Hurricane Irma survivors on the island to help them to replace things lost in the devastating storm such as their roofs. etc. “We will find those people and that is what the #SXMStrong Coca Cola campaign is all about,” he said.

In brief remarks at the ceremony Romeo-Marlin said the move by CC1 illustrates patriotism and pride in Sint Maarten. “By placing the Sint Maarten flag and #SXM Strong on these Coca Cola cans, you are sending a powerful message to the community and our visitors alike that Sint Maarten is committed and steadfast in our efforts in rebuilding and bouncing back after the devastation of Hurricane Irma,” she said.

“We are all well aware that the road to recovery is not easy and we need all hands on deck. As Government we are focused on moving the recovery process forward with all parties. I want to thank CC1 for this bold gesture and encourage other businesses in the community to continue with their efforts in rebuilding our economy. We are not there as yet by any stretch of the imagination, but together with private and public initiatives as these, we will accomplish a full recovery for the people of St. Maarten.”