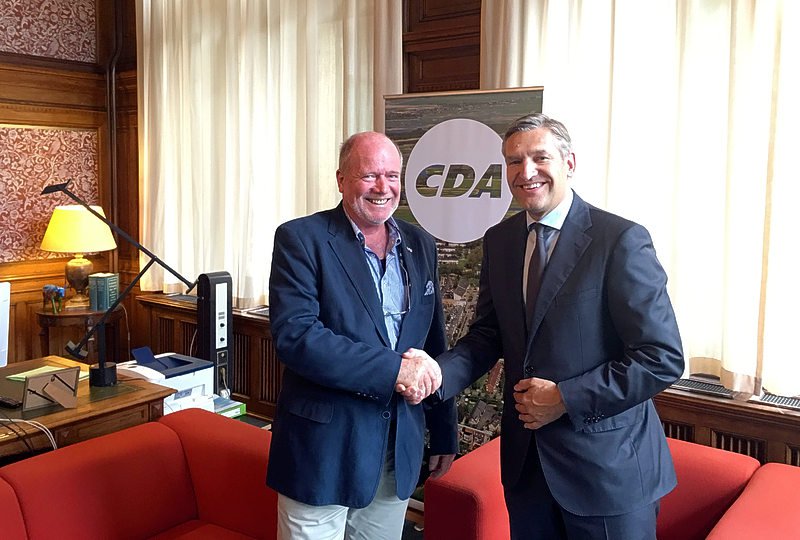 DP Statia Councilman Koos Sneek had talks with prominent CDA members in the Netherlands this week to discuss the possibilities of cooperation. On Thursday Sneek met with leader of the CDA party in the Second Chamber of the Dutch Parliament Sybrand van Haersma Buma. Earlier in the week, he met with Chairperson of the CDA board Ruth Peetoom at the CDA party headquarters and also with Senator Sofie van Bijsterveld.

“We are looking at the possibilities to establish a general cooperation, where the DP Statia could make use of CDA’s Steenkamp Scientific Institute and the workshops are offered in for example the area of administration and governance. This cooperation would fit in our desire to strengthen the party, its representatives and its individual members,” Sneek told The Daily Herald on Thursday.

Cooperation with the CDA would also benefit the access of DP Statia in the First and Second Chamber. “As a party, we would be better able to share our concerns, create more understanding and increase support for St. Eustatius in The Hague,” he said.

Linking with a party like the CDA increases the representation of a small island like St. Eustatius in Dutch politics, in the Parliament. “People clamour that we have a democratic deficit within the Kingdom, that the islands are not represented in the Dutch Parliament and that we have no say.

But people should understand that the Dutch parties work on a national level. The Dutch islands Texel and Terschelling are also not represented as individual islands in the Parliament. St. Eustatius is part of the Netherlands. To me the connection with a Dutch party feels as having a form of representation,” said the Councilman.

Why the CDA? For one, the ideologies of both parties correspond. But the intention for cooperation actually came about during a visit of Van Haersma Buma to St. Eustatius some six weeks ago. “We met during his vacation on the island and he invited me for a meeting in The Hague,” said Sneek.