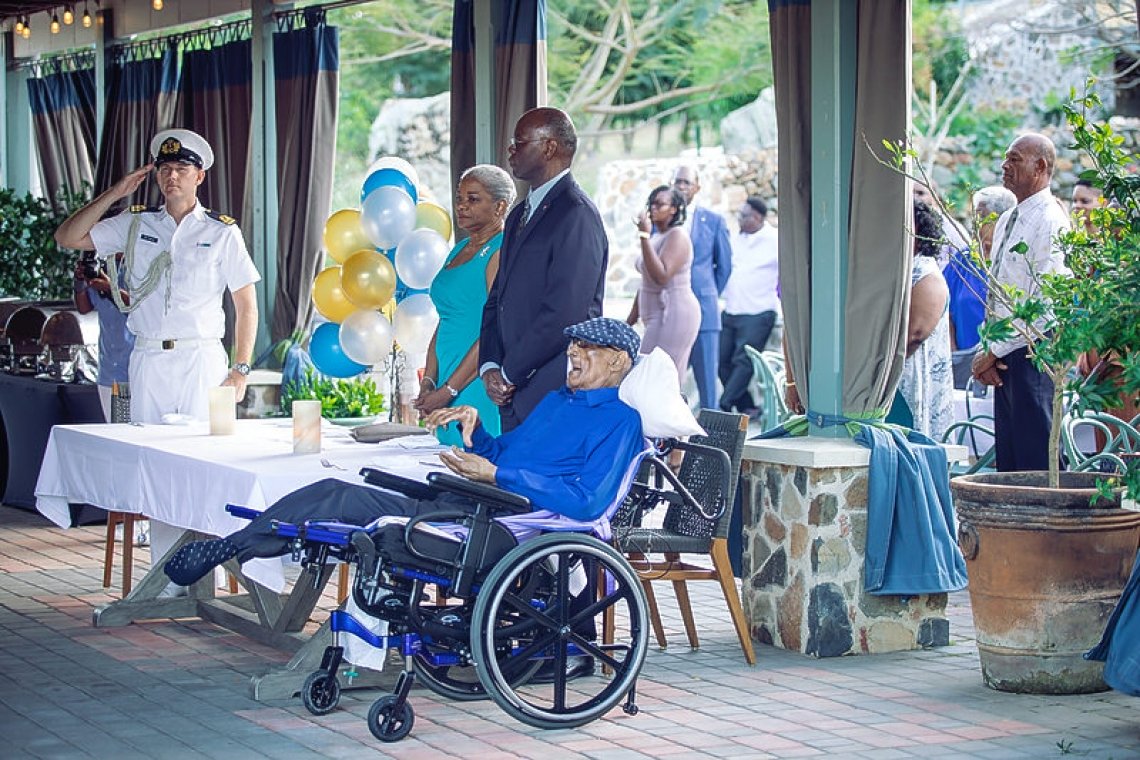 PHILIPSBURG–“A big bowl of Guana Soup,” is amongst the things that centenarian Wilfred Hazel believes is responsible for his longevity.

Born in St. Maarten on March 8, 1920, Hazel recently celebrated his 100th birthday in a grand celebration held on March 8, at the Emilio Wilson Estate with family, friends and special guest, Governor Eugene Holiday and his wife.

Hazel’s ancestors worked as slaves on this estate, back in the days. Hazel served in the army in his late teens. He was originally based in St. Maarten, but was subsequently transferred to Curaçao and then Aruba. While in the army, he met and married his wife, Lucia Hodge, from Anguilla. From this union, eight children were born. While in Aruba, he finished his service, and began his civilian life.

Hazel worked for many years at Lago (the former oil refinery in Aruba). At Lago, he worked mainly at two departments: the Esso Club and the Commissary. The Commissary was a supermarket for Lago employees only.

He worked at the Commissary until Lago ceased its operations. After Lago, he found employment at Kong Ming Supermarket, where he worked until his retirement. During his Kong Ming period, Hazel received a gift of a surprise trip to St. Maarten, to spend a three-week vacation. Initially, the gift did not fall on good grounds, Hazel’s family said.

“He fumed for days and even threatened his family that he would not go one single place, if his family did not back off on the way he wanted to dress to travel,” the family said. Hazel wanted to travel, well dressed in his suit, and tie and a hat on his head. His family, on the other hand, wanted him to dress casually for travelling. He eventually took the trip. That had been his first time ever back to St. Maarten, since he left.

That first trip back was when his passion for his homeland revived. Every year he would return to St. Maarten on holidays, until he finally decided to return to his birth land for good. He built his home in Cul-de-Sac; the very same place where he was born and raised. He now has 25 grandchildren and 32 great grandchildren. His fondest memories as a young man growing up were with his brothers and his father’s donkeys’ and horses that they often rode. Hazel now resides at the St. Martin’s Home in St. John’s Estate.