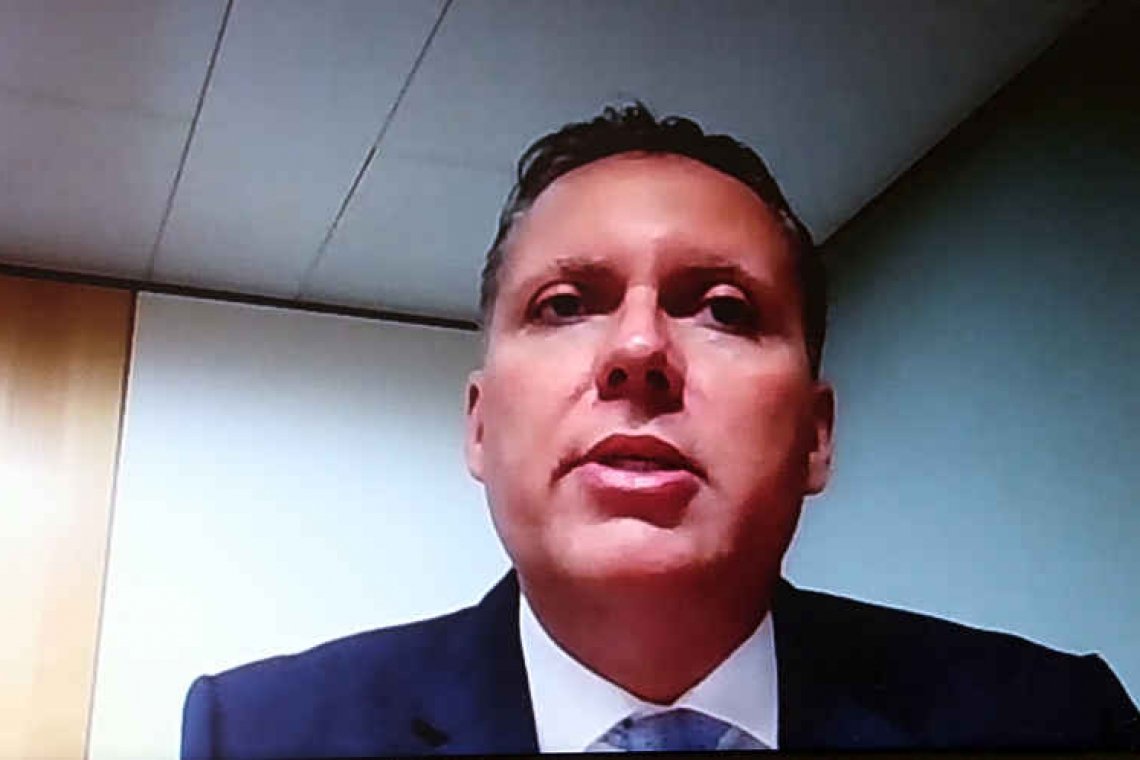 CBCS interim president Jose Jardim during the virtual presentation of CBCS’ 2019 annual report. St. Maarten’s economy will decline by 24.5 per cent this year, said Jardim (right). In 2021 a rebound of 10.3 per cent growth is expected. For monetary union partner Curaçao, these prognoses are respectively minus 20.4 per cent and plus 6.6 per cent. To illustrate the growing dependence on their hospitality industry in both Dutch Caribbean countries, he explained that 41 per cent of foreign exchange earnings came from tourism in 2019, compared to just 14 per cent two decades ago.~ ‘Kingdom countries should work closely together’ ~ WILLEMSTAD/PHILIPSBURG–“The corona[virus – Ed.] crisis combined with the spill-over effects of the economic crisis in Venezuela on Curaçao and the impact of Hurricane Irma in St. Maarten have caused a deep imbalance in the public finances and the budget dynamics of both countries,” Central Bank of Curaçao and St. Maarten (CBCS) interim president Jose Jardim stated in the Central Bank’s 2019 annual report.“Given the magnitude of this imbalance, single-track fiscal policy will not be effective in achieving recovery,” he stated during Thursday’s online presentation of the report. “The current situation demands an integrated approach in which the countries in the Dutch Kingdom work closely together on a medium-term adjustment plan of fiscal consolidation and growth-enhancing structural reforms tied to a strict timeline.”The economic repercussions of the global coronavirus pandemic for Curaçao and St. Maarten are immense, Jardim said.“The economies of both Curaçao and St. Maarten are projected to contract by more than 20 per cent in 2020. This severe economic contraction will result in rising unemployment, more poverty and a further worsening of the public finances,” he stated.“The corona crisis has exposed our macroeconomic weaknesses and vulnerabilities, including unsustainable public finances, rigidities in the labour market and an overall poor investment climate. If these weaknesses had been addressed effectively earlier, the countries would have been in a better position to cope with the current crisis.”The Kingdom Council of Ministers agreed to deviate from the budgetary rules stipulated in Article 25 of the Kingdom Law on Financial Supervision for Curaçao and St. Maarten. Furthermore, both countries requested financial support from the Netherlands to mitigate the negative socio-economic consequences of the corona crisis through stimulus and relief measures, including payroll subsidies for businesses and income support for the most affected groups in society.In addition, part of the financial support from the Netherlands will be used to compensate for the loss of tax revenues incurred because of the deep economic contraction. However, the financial support has been tied to strict conditions.“Tying financial support to structural reforms is in principle not unreasonable. However, the current conditions imposed by the Kingdom Council of Ministers are not addressing our macroeconomic weaknesses in a structural manner,” Jardim pointed out. “Some of these conditions include measures that are counterproductive due to their pro-cyclical nature exacerbating unemployment conditions and poverty.”Instead of single-track fiscal policy that will not be effective in achieving recovery, Jardim argues for a medium-term plan of fiscal consolidation and growth-enhancing structural reforms.“This plan should include economic reforms that increase the growth potential of Curaçao and St. Maarten. Both countries should finally draft and implement measures that improve the investment climate, address labour-market rigidities and foster a better match between labour demand and supply,” he explained.“In the area of fiscal policy, government expenditures should be controlled by reducing spending and changing the budget dynamics. In other words, expenditures should grow less than revenues. Therefore, the annual increase in wages and salaries in the public sector is not sustainable.”In addition, Jardim recommended taking measures to improve tax compliance to increase government revenues without undue reliance on raising tariffs.“Curaçao and St. Maarten should also negotiate with the Dutch government to transform part of the financial support into a grant to reduce the public debt burden,” Jardim recommended.“After all, the borrowing due to the corona crisis will not only result in unsustainable public-debt levels but also increase the foreign indebtedness of the monetary union, which will affect the balance of payments in the future. Turning these loans into a grant could be conditional on progress made with fiscal consolidation and structural reform,” he said.The complete text of the Central Bank president’s statement and the Bank’s 2019 annual report can be viewed on the bank’s websitewww.centralbank.cw under the publications section.