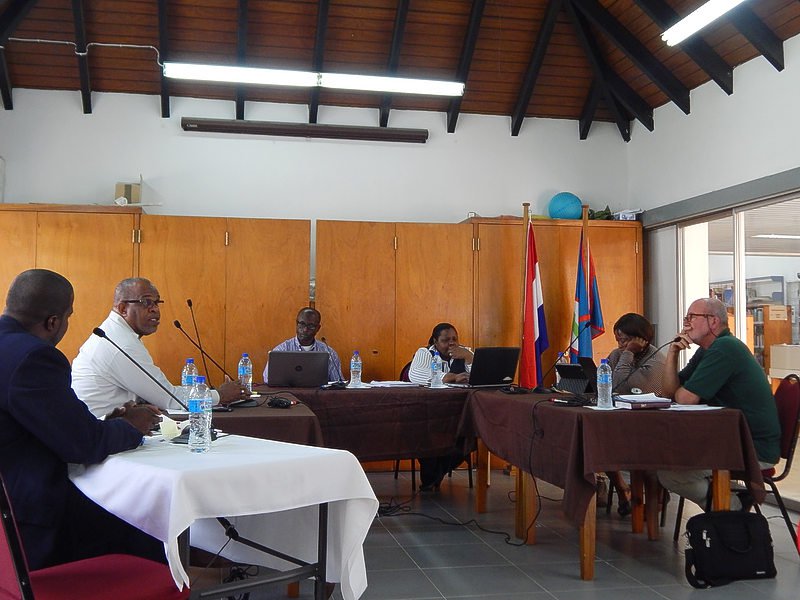 ST. EUSTATIUS–The Island Council’s Central Committee discussed a wide range of topics ranging from the trip of Members of the Executive Council to the Netherlands, the NuStar agreement, the electoral college of the Dutch Parliament’s First Chamber and an interest-free loan for Gwendoline van Putten secondary school.

All Island Council members were present for the meeting. Commissioner Derrick Simmons was not present as he is in the Netherlands for talks with various ministries.

The first topic that was discussed was the First Chamber’s Electoral College. Commissioner Charles Woodley stated that he told the Dutch Ministry of Home Affairs and Kingdom Relations BZK that the Executive Council would prefer to talk about the road to autonomy, instead of the Electoral College. But seeing that no response would indicate that St. Eustatius agrees with the proposal to form such a College, an extension was asked for a response, which was granted to the Island Government with an expiration date of May 31.

Van Putten stated that since there was a lot of “back and forth” concerning the Government spending money, the amount to be spent would be limited to the current majority members of PLP and independent Reuben Merkman and the Secretary.

Van Putten stated that the motion was introduced in regard to Commissioner Simmons trip. He said there was a “lot of commotion” about his trip with advisor Xavier Blackman, as well as other “newspaper articles” stating that the current Government “is being careless with money.”

The adjusted NuStar agreement then took centre stage. Commissioner Woodley explained that changes were made to accommodate the concerns of the Dutch Ministry of Economic Affairs and the State Attorney in the Netherlands about taxes and the Marine Environmental Ordinance.

Simmons said they had obtained legal advice on both. The Department of Legal Affairs and outside advisors had gone through the document to ensure that no mistakes were made in the wording of the document and in issues related to taxes. The adjusted agreement went via NuStar to the Dutch Ministries and the mediator.

“In making these reasonable changes we hope there are no more stumbling blocks,” Simmons said, adding that Government is already receiving monies under the agreement. He said that if there were still problems, he would have heard about that by now. The document in question was sent to the Island Council. The yet to be amended Marine Ordinance is still under scrutiny by lawyers.

A disagreement broke out concerning whether the State Attorney was consulted over the adjusted NuStar agreement. Councilman for the Democratic Party (DP) Koos Sneek wanted confirmation that the adjusted agreement was sent out to the relevant Ministries.

The interest-free loan for Gwendoline Van Putten (GVP) School involves additional funds of US $1.3 million for renovations. The Dutch Government is in charge of education on the island.

Sneek inquired why there is a shortfall since the Executive Council knew about this issue since 2014.

“Who is responsible for the shortfall? What happened to the three million for unforeseen circumstances that were budgeted?” Sneek wanted to know.

He called upon the Executive Council to contact the Government Building Service (Rijksgebouwendienst) who is handling the renovation and to also provide the Island Council with a breakdown of the funds for the school. The original budget for the GVP School was five million for material and labour.

Commissioner Simmons said that he would inquire about these questions and get back to the Central Committee as soon as possible.

The last topic under discussion was the Audit Chamber for Statia, Saba and Bonaire. It has been four years now since efforts were started to get this project off the ground. Saba indicated it wanted to go alone, which has caused some consternation between the three islands.

Merkman stated that he had received notice from a Saba Island Council member that an email circulated on the sister island in which it was stated that Saba would like to team up with Statia during meetings on the Audit Chamber.