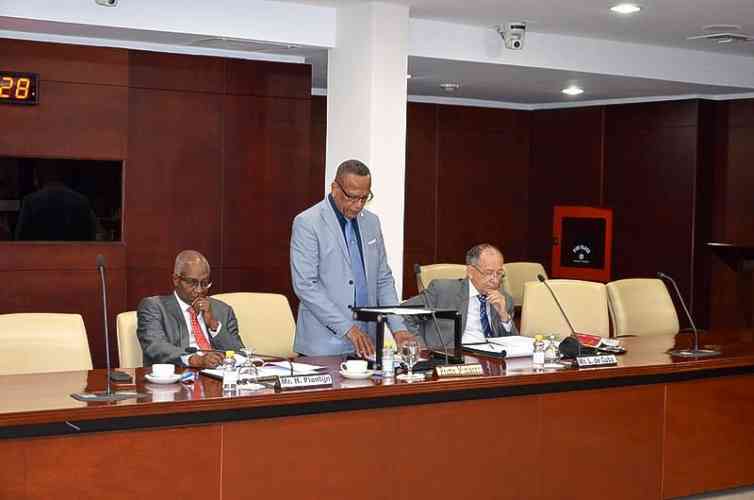 ~ Based on new election date ~

PHILIPSBURG–Members of the Central Voting Bureau, who had made their positions available earlier this week, have informed government that given the new dates, they will be conducting the election which has been set for January 9, 2020.

This information was provided to Members of Parliament (MPs) by caretaker Deputy Prime Minister Wycliffe Smith during an urgent meeting of parliament on Thursday afternoon. According to Smith, the new dates associated with the electoral process are: Nomination Day on November 21, 2019; Election Day on January 9, 2020, and the dissolution of Parliament and convening of the new Parliament on February 10, 2020.

Smith told MPs that members of the Central Voting Bureau had submitted a letter on Thursday confirming that as the dates that were the grounds for their decision no longer exist, it is now legally possible for them to execute their tasks and responsibilities according to the oath they have taken to conduct the elections.

Central Voting Bureau members made their positions available on Tuesday, October 1, which raised concerns with the Council of Ministers and the Governor as to whether organising and executing the election process could be carried out in a proper and orderly manner.

During the meeting, Smith presented what he said had been facts on the election process to date. He said the Council of Ministers had submitted a draft National Decree (Landsbesluit) to the Governor on September 23, invoking article 59. This National Decree (Landsbesluit number 1) had been carefully prepared and motivated, given the history of previous snap elections and after due consultation with the Electoral Council and the Central Voting Bureau.

Landsbesluit number 2 was then forwarded to the Central Voting Bureau on September 25. By letter, on the same day, the Central Voting Bureau raised objections against the dates in Landsbesluit number 2. Their objections were based on both legal grounds (violation of the Kiesverordening, violation of Article 23 of the Constitution and violation of International Treaties) and logistical organisational grounds.

On September 25, the Council of Ministers also received a letter from a new political party, Party for Progress (PFP), which, due to the deadlines set in Landsbesluit number 2 would not be able to participate in the election, and PFP claimed violation of the European Convention on Human Rights.

“The Council of Ministers took these letters seriously and considered how a compromise could be reached to ensure that the requirements of the Constitution could be met in such a way that violation of the treaties could be avoided. Various alternatives have been considered and there were consultations with the Governor and with other stakeholders.

“In both cases, it would have to be clearly acknowledged that this is an exception, because of the pending urgent amendments that are needed to the laws that regulate the electoral process. Maintaining the checks and balances which safeguard the trias politica, but ensuring that the conditions and deadlines required by the electoral laws are clear, reasonable and feasible, respecting the right to choose and to be chosen.

“These dates are quite close to the dates that the Council of Ministers had originally proposed in its very first draft of Landsbesluit number 1,” Smith said.

The considerations given to support the decision are:

That according to the National Degree dated September 23,  2019, the government has decided to dissolve the Parliament of St. Maarten and that the first meeting of the newly elected Parliament was scheduled for December 23, 2019;

That by letter dated September 25, 2019, the chairman of the Central Voting Bureau expressed his concern regarding the feasibility of the time frames mentioned in the Election Ordinance and in the Ordinance on Registration and Finances of Political Parties as a consequence of the aforementioned National Decree;

That as a result of the abovementioned concerns all the members of the Central Voting Bureau made their positions available in a letter dated October 1, 2019;

That because of this it was impossible to guarantee the careful preparation and the proper execution of the elections;

That because of this, government was compelled to amend the dates of nomination, election and the first meeting of Parliament that were mentioned in the National Decree of September 23, 2019;

That the elections will be held as soon as possible so that the first meeting of Parliament can be convened in the shortest time possible after the initial date that was mentioned;

That government has taken into account the possibility for political parties to be able to register;

That the democratic principles and the rule of law dictate that once elections have been called they cannot be reversed;

That the decree at hand deviates from article 59, sub 2 of the Constitution, in that the term of three months between the dissolution decree and the first meeting of Parliament have not been met and that such a deviation is only justified in very exceptional cases and such is the case before us.