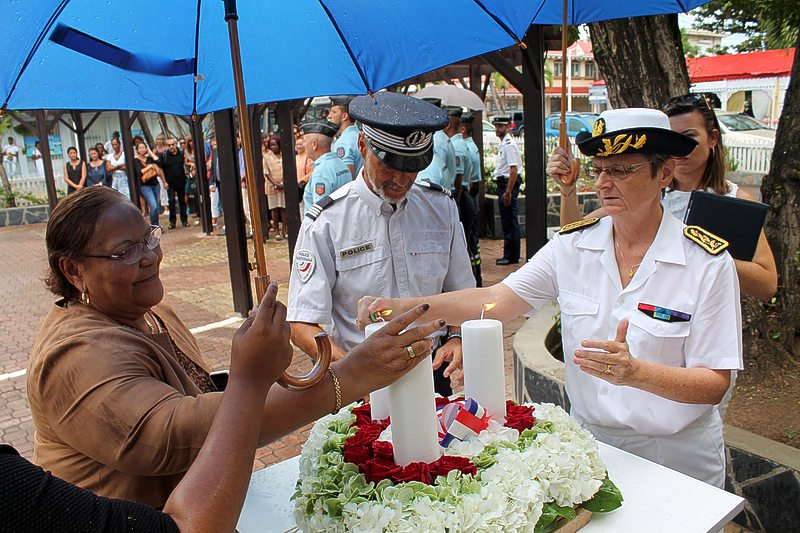 MARIGOT–Two ceremonies were held in St. Martin on Monday to remember the victims of the wave of violence that swept through St. Martin last week and the latest terrorist attack in Nice, France, where 84 persons lost their lives.

There was a gathering in the garden of Hotel de la Collectivité at midday, where Territorial Council President Aline Hanson, Préfète Anne Laubies and Police aux Frontières (PAF) Commandant Jean-Luc Deras lit candles. A brief shower of rain threatened to disrupt proceedings, but it was over quickly.

A battalion of Gendarmes also was present, joining various elected officials, Collectivité staff and members of the public. A minute’s silence was observed.

Then at 6:00pm, a gathering formed on the breakwater at Marina Fort Louis. Reminiscent of the “Je Suis Charlie” vigil at the same spot after the Charlie Hebdo massacre in Paris, participants were asked to wear white and carry a flower or candle. The turnout on this occasion was far less in number than the “Je Suis Charlie” event, with only about 70 persons at the most taking part.

Taking on the initiative to organise this remembrance was Junior Territorial Council member Pierre-Lou Richeux and Mad Twoz Association of Sandy Ground.

Participants walked down to the end of the breakwater to place their flowers and candles on the concrete circle, before a minute’s silence was observed.

Richeux expressed his own feelings about violence and invited others to speak, but no one else came forward.

Préfète Laubies will divulge on Wednesday the security plan for the overseas territories and the impact it will have in St. Martin in keeping with the renewed and heightened state of alert in France, as announced by President François Hollande.