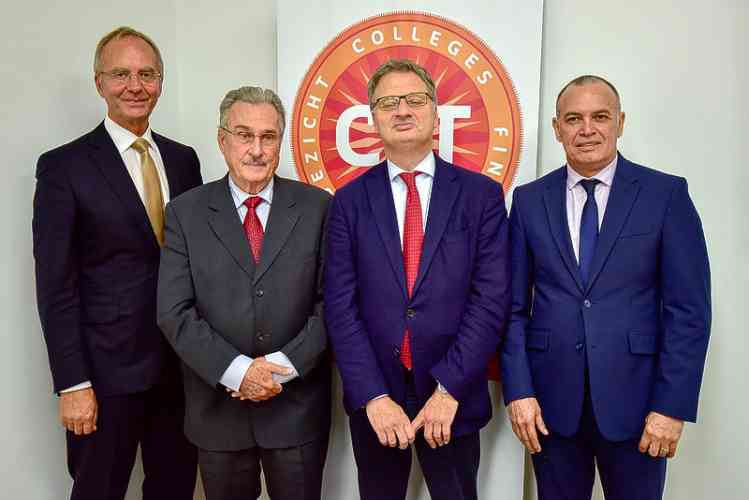 The Committee for Financial Supervision.

WILLEMSTAD–The Committee for Financial Supervision CFT on Monday advised the Kingdom Council of Ministers to give an instruction to Curaçao to balance its budget.

Government’s income fails to cover its cost and the financial management is not in order. The 2017 financial year closed with a deficit of 116.8 million Netherlands Antilles guilders and the provisional deficit in 2018 amounts to NAf. 52.7 million. “Since 2016, CFT had been expressing concern about the financial situation in the Dutch Caribbean country due to over-optimistic revenue estimates, deficiencies in financial management and a lack of budget discipline, reason the expenditures do not remain within the budgeted amounts” stated a CFT press release.

“This year’s budget threatens to also have a (substantial) deficit of around NAf. 100 million. Despite some meaningful measures the country of Curaçao wants to introduce as per July 1, the legal standard of a balanced bottom line will not be met for the third consecutive year. More is needed than the currently announced measures to balance the income and expenditures of the country. A change, of course, is needed.”

CFT says it realises the task at hand is considerable, yet structural reform is inevitable and needed to ensure the continuity of the collective social securities, to create space to compensate for referred deficits as of next year, and to make additional investments in among others education and training. “Allowing for the deficits to increase would result in a further growth of the public debt, which will be passed on to the next generations.”

In CFT’s opinion, the strengthening of Curaçao’s economy requires primarily private investments. “A necessary basic condition to that effect is sustainable and sound management of public finances. After all, private investors are interested in limiting their risks and they want to be able to rely on the stability and quality of the civil service and administrative apparatus. In that area as well, progress will have to be made in the coming years.”

In a letter to his Dutch counterpart Mark Rutte, Curaçao Prime Minister Eugene Rhuggenaath had earlier asked for more time to balance the 2019 budget. This can be done through article 25 of the Kingdom Financial Supervision Act.

The official request follows the advice of the Committee for Financial Supervision CFT to indicate in an administrative consultation with the Netherlands cooperation is required to put government’s finances in order, according Rhuggenaath.

The prime minister gave an extensive sketch of the socioeconomic situation in the Dutch Caribbean country, in which the crisis in neighbouring Venezuela and its local consequences is the common thread. The reality currently facing the island, mainly caused by external factors, has a direct effect on public finances, Rhuggenaath wrote.

During the negotiations on the organisation of the financial supervision Article 25 was included, among other things, against the background of the drastic, negative economic consequences for Curaçao during the economic crisis that also took place in Venezuela in the early 1980s, the prime minister added.

He said that to stimulate economic growth it is also necessary to borrow at least NAf. 60 million extra annually for “high-impact” investments in sustainable projects with a structural effect and those that reduce social disadvantages.

At the conclusion of his letter, Rhuggenaath said he would like to consult Rutte in the very short term about the possibility of borrowing money to fund the necessary economic reforms identified in the Growth Strategy Plan.

“In this consultation, I will be able to further explain Curaçao’s request to reach an agreement on the path we envisage not only to achieve structurally sound government finances, but also to achieve socioeconomic conditions that offer prospects to the Curaçao citizen and especially the young people,” the prime minister stated.