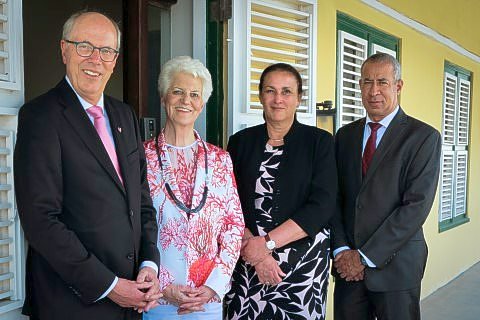 WILLEMSTAD/PHILIPSBURG–Curaçao, Aruba and St. Maarten succeeded in meeting the standards of financial supervision in 2016 in the face economic adversity, said the Committee for Financial Supervision CFT in its 2016 Annual Report.

Likewise Bonaire, St. Eustatius and Saba were successful in 2016 in getting their budgets at least balanced. However, all countries and public entities still confront enough challenges in the area of public finances, especially with regard to budgetary sustainability and financial management.

In 2016, CFT advised for the first time all countries and public entities in the Caribbean part of the Kingdom on a full annual cycle of budget preparation, implementation and accountability, since Aruba as well introduced financial supervision in 2015. Due to a less favourable economic climate with lingering economic growth and deflation, it was difficult to realise the budgeted tax revenues.

Despite the economic downturn, the three countries and public entities have succeeded in achieving the financial supervision standards in 2016.

Curaçao and St. Maarten managed to achieve budget surpluses on their ordinary service, whereas Aruba realised a budget deficit of 2.0 per cent Gross Domestic Product (GDP), which is in accordance with the standard. Bonaire and Saba concluded the year with a balanced budget, whilst St. Eustatius realised a surplus, which was largely utilised to compensate for previously incurred deficits.

Balanced budgets are not always sufficient to ensure sustainable public finances. For Aruba and St. Maarten, the budget results are strongly correlated with incidental revenues.

Particularly for Aruba it is important to start taking the necessary steps to make the public finances more sustainable, now that the debt ratio has increased further to 86 per cent of GDP as a result of the budget deficit and a decreasing GDP. For Curaçao and St. Maarten, the debt ratio is respectively 42 per cent and 33 per cent. In order to achieve sustainable public finances, an important contribution may be the introduction of a 40 per cent debt quota standard into the national legislation, thus following an International Monetary Fund (IMF) advice.

Because of the financial supervision, Curaçao and St. Maarten are allowed to borrow at very favourable interest rates. The financial benefit is 1.5 per cent of GDP on an annual basis. For Aruba, the interest rates have now dropped, whilst the spread that the country has to pay on international capital markets was reduced with 1.5 per cent since the introduction of financial supervision.

Nevertheless, interest rates of 17 per cent of Aruba’s income are too heavy for the budget. As a result of low economic growth, low inflation and a relatively high interest rate, Aruba is subject to a perverse “debt dynamics.” These three factors ensure that primary budget surpluses are not sufficient to reduce the debt ratio within the foreseeable future. Higher economic growth and lower interest rates are necessary to break the vicious circle.

The Annual Report contains a separate chapter focussing on how to achieve sustainable public finances.

The improvement of financial management is not making any progress yet, said CFT. Financial statements are adopted too late and accountants are not able to submit unqualified audit opinions on the basis of the information that is provided to them.

For Curaçao, the objective is to obtain an accountant’s statement of reliability in 2018, while for St. Maarten and Aruba the deadline is set by 2020. After that, steps will be taken to obtain accountant’s certifying statements of legitimacy. Strengthening of the tax department is required in all countries in order to improve compliance of tax payments.

Outgoing CFT Chairman Age Bakker said CFT “looks back on a year in which – in good cooperation with the countries and public entities – significant steps have been taken towards reaching more sustainability of the public finances.”

He added that the Parliaments play an important role in accounting for the execution of policies and for the public finance. The Parliaments are supported with sound advice of the advisory councils and the general audit chambers. For the year 2017 the countries and public entities again face major challenges.

In cooperation with two CFT boards, the pursuit will be to meet budget standards, as well as an improvement in financial management and reforms that will lead to long-term sustainable public finances, Bakker said.