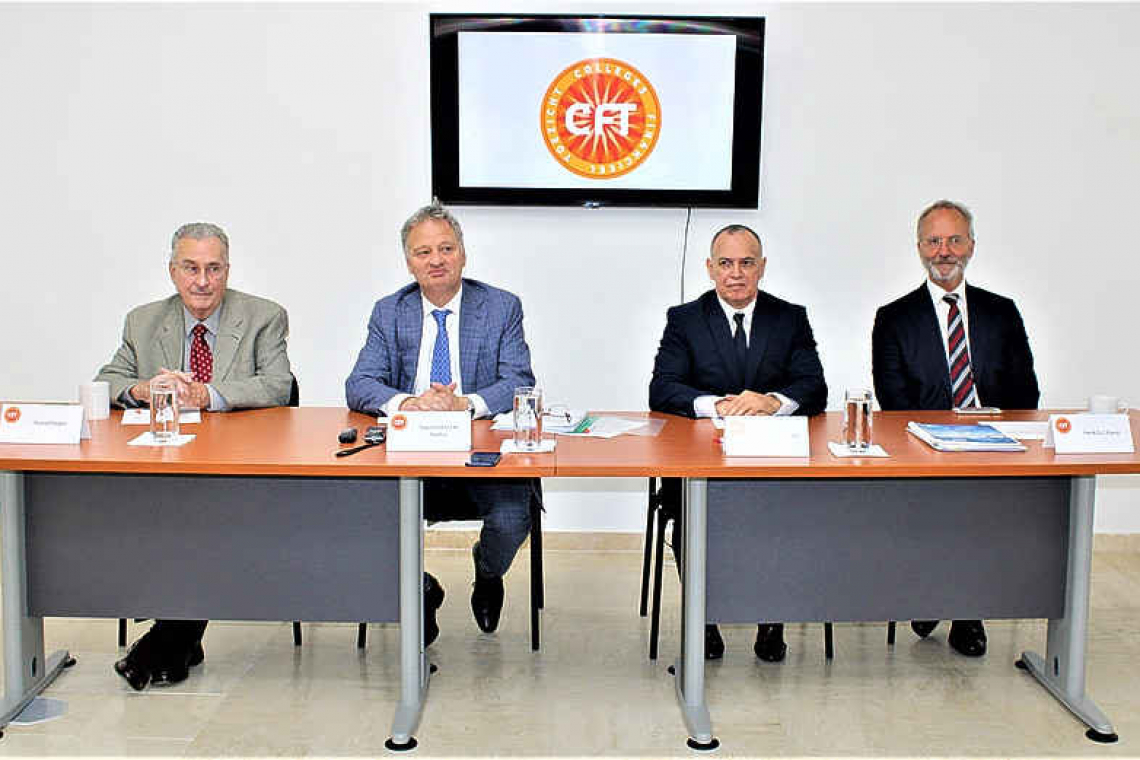 The members of the CFT on July 7, the last day of their three-day visit to St. Maarten.

PHILIPSBURG–St. Maarten needs to cut government spending and increase revenues as soon as possible, said Raymond Gradus, chairman of the Committee for Financial Supervision CFT. “Given the deficit of more than 400 million [Netherlands Antillean – Ed.] guilders on the draft budgets for 2020 and 2021, it is clear that the government and Parliament of St. Maarten do not have national finances under control.”

The CFT chairman calls it “very disappointing” that St. Maarten has not yet adopted the 2021 budget. “This should have happened before December 15, last year. Today is July 7th, and still no budget.” At this point, all attention should be focused on the 2022 budget, which should be ready for review in September, said Gradus – “in two months’ time.” The CFT chairman is hopeful. “Finance Minister Ardwell Irion has committed to meeting the deadline.”

Wednesday, July 7, was the last day of the CFT’s three-day visit to St. Maarten. “The government of St. Maarten is facing great challenges regarding the budget. St. Maarten will have to work actively and methodically to reduce the budget deficit and create a surplus,” said Gradus, who repeatedly pointed out that the deficit is more than 20 per cent of the gross domestic product (GDP).

In his explanation of the visit to St. Maarten, Gradus referred to the International Monetary Fund (IMF). That paints a murky picture for the island’s financial future. “Government debt would peak at about 82 per cent of GDP in 2021 and gradually decline to about 69 per cent of GDP by 2026, although it is likely to increase again in the long term, unless the authorities take measures to restore the sustainability of the health and the pension schemes,” the IMF said in its latest report.

The CFT also emphasises that the current health model is inefficient and financially unsustainable. “In order to make healthcare sustainable, structural reforms aimed at limiting expenditure are inevitable.” One option, said Gradus, is to align the health insurance premium for civil servants with that for employees in the private sector. “Civil servants contribute significantly less to healthcare cost than those insured through [Social and Health Insurances] SZV; the country benefits if all employees pay the same percentage. A second possibility is to raise considerably the wage limit for health and accident insurance. A third option is to make politicians pay as well for their health insurance and pension.”

The CFT urges the government to immediately take cost-reducing measures to prevent the budget deficit from increasing further. The standards of the Kingdom Act on Financial Supervision must be met, said Gradus.

When asked whether the CFT considers for the new budget that the workbooks of civil servants have been revised, whereby many civil servants are entitled to a higher salary scale, the CFT chairman answers: “That would lead to considerably higher expenditure for the civil servants – said government. There is no room for that. Government salary-cost is already too high.”

Not only do government expenditures have to be reduced, but more money also needs to be put into the treasury quickly. “In the near future tax reforms are absolutely needed,” said Gradus, “Taxes on property and land are essential to bring tax revenues to a much higher level.” Under a property tax system, the government requires or performs an appraisal of the monetary value of each property, and tax is assessed in proportion to that value. “A policy for this was developed in St. Maarten years ago, but it has not been implemented. That has to happen quickly.”

The CFT insists on property tax but makes no mention of the need to set up a Gaming Control Board to supervise casinos and collect tax on games of chance. However, the IMF advised the government of St. Maarten to start levying taxes on gambling activities on the island.

According to the IMF, the advised tax policy reforms would benefit from more specificity and incorporating the advice from recent IMF technical assistance. “St. Maarten tax administration function needs to be improved as a matter of priority before any adjustments in tax policy. Tax administration reform needs to be supported by adequate resources.”

Both the IMF and the CFT agree that the country needs strong public financial management reforms, including stronger internal controls and procedures, better handling of fiscal risks, and improved transparency.