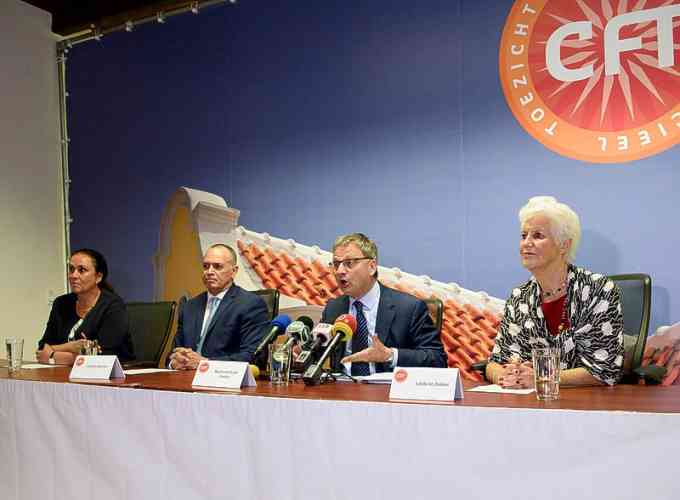 THE HAGUE–The Committee for Financial Supervision Curaçao and St. Maarten CFT did communicate to the St. Maarten Government in a “correct and timely” fashion that it would advise the Kingdom Council of Ministers to issue an instruction regarding the 2018 budget.

The CFT informed The Daily Herald through its spokesperson on Monday that caretaker Prime Minister Rafael Boasman and Finance Minister Richard Gibson were informed of the CFT advice on December 21, 2017. The Parliament of St. Maarten was informed a day later, on December 22.

Gibson told the Parliament during a meeting on December 27 that his “confusion had no bounds” when he saw the CFT’s December 22 letter to Parliament, which was published in this newspaper on December 23.
According to the CFT spokesperson, Gibson had indicated after the Christmas holidays that he had not received the email in which he was informed of the CFT advice. The CFT subsequently resent the email to the Minister.

The Kingdom Council of Ministers is slated to meet on Friday, January 19. Its agenda is secret, but it is very likely that the instruction to St. Maarten will be discussed on that day.
St. Maarten has received an instruction based on the Kingdom Supervision Law at an earlier occasion. In September 2015, St. Maarten was ordered to eliminate its payments arrears, to compensate its deficits incurred over the period 2010-2014, to include all expenditures relating to pension and health care provisions in the budget and to reform the pension and health care system.

The CFT published on Monday a December 15, 2017, letter that was sent to Minister Gibson regarding the recent proposal to amend the St. Maarten Government’s 2017 budget to accommodate some changes to Government’s expenditures and revenues as a result of Hurricane Irma. The St. Maarten Parliament adopted this budget amendment late last month.

Funds were also included in the new budget amendment to facilitate a training programme for jobseekers in the hospitality sector. The budget amendment further detailed a decline in personnel expenditures of NAf. 8 million, not NAf. 12 million as stated in the earlier Memorandum of Amendment.

Aside from the limited changes in expenditures totalling NAf. 14 million, the CFT found that the St. Maarten Government had sufficiently taken into account its advice regarding the earlier Memorandum of Amendment.
The budget amendment showed a NAf. 153.2 million deficit over 2017. The St. Maarten Government will need some NAf. 78.1 million in cash to comply with all of its payment obligations of 2017.

According to the CFT, this cash is needed to prevent St. Maarten from having to use the means reserved for general payments, payments to the General Pension Fund APS and the Social and Health Insurances SZV, and for the capital account.
The CFT letter dated December 15, 2017, preceded the December 22, 2017, letter the CFT sent to the St. Maarten Parliament on December 22 regarding the issuing of an instruction.