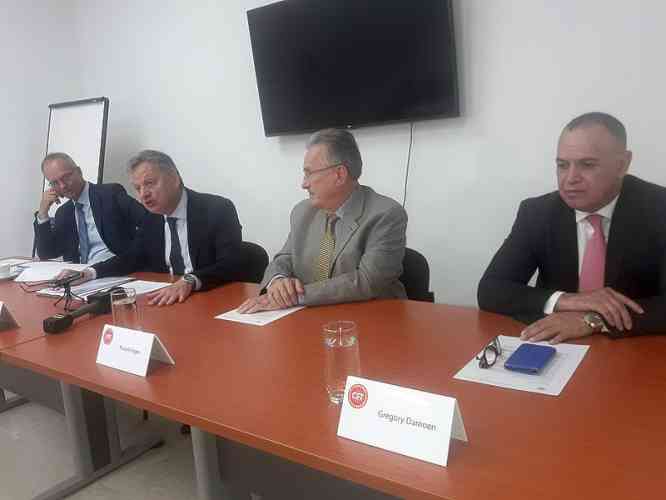 PHILIPSBURG–The Committee for Financial Supervision CFT on Wednesday issued an appeal to Parliament to approve “the already much-delayed” 2019 budget.

CFT said the approval is needed to obtain loans such as the loan for the recovery of Princess Juliana International Airport (PJIA), and to start with projects to structurally increase government income, such as the reform of the tax administration and the improvement of financial management.

CFT visited Sint Maarten from June 24 to 26, and held meetings with Governor Eugene Holiday; Minister of Finance Perry Geerlings, the Council of Ministers and the programme manager for the reform of the tax administration. CFT’s key message during its visit to St. Maarten this week is for authorities to translate plans into actions and tangible results.

CFT Chairman Raymond Gradus told reporters at a press conference on Wednesday that “things are not moving at the desired speed,” in the country and “overall, country Sint Maarten is lacking progress.”

CFT called on Parliament to decide on the draft budget as soon as possible. A budget for 2019 will provide government with a legal basis for its intended expenditures and is a precondition to set in motion key projects and therefore needed loans, CFT said in a press release issued after the press conference.

CFT stressed the importance of a strengthened tax administration, which must lead to the much-needed structural increase in government revenues. These future revenues can be used to carry out the necessary government tasks, solve the current payment arrears and lower the country’s debt.

The implementation of the new plan to improve financial management is delayed, while no significant progress has been made with the original plan during the past years. This lack of significant progress puts the agreement with Sint Maarten to obtain an unqualified auditors’ report on the 2021 financial statements under pressure. “The CFT urges to carry out the implementation of these important improvements without any further delay,” Gradus said.

Other matters that were discussed during the visit of the CFT are the 2019 budget performance, the preparation of the 2020 budget, liquidity support and the current status of the 2015 Kingdom Council instruction. To comply with this instruction, Sint Maarten has to compensate its past deficits, solve its payment arrears and make the country’s healthcare system and old-age provision sustainable. With regard to the latter, Sint Maarten has proposed to increase the AOV age from 62 to 65 years in 2020.

CFT advises Sint Maarten to start with the 2020 budgeting process so there will be a draft in the upcoming months and to include the increase of the AOV age. CFT said it was disappointed that the promised adjustment to the pension legislation has not been implemented yet. “Further delay is highly undesirable.”

The debt to Gross Domestic Product (GDP) ratio of Sint Maarten is expected to rise from 37 to 51 per cent in 2019. This increase is mainly due to the intended loan for capital expenditures, the loan for the recovery of the airport and liquidity support. CFT said it will monitor the development of the debt to GDP ratio with the aim to keep it at a sustainable level.

In 2010, the Netherlands agreed to take over 70 per cent of the outstanding debt of the former Netherlands Antilles. At the same time, the Kingdom Act financial supervision was adopted and CFT was founded to help Sint Maarten and Curaçao prevent a recurrence of an unsustainable debt position. As a result of the Kingdom Act, a low interest rate applies for the current outstanding debt and new capital investment loans. “This interest is significantly lower than the interest rate in other Caribbean countries. Sint Maarten has thus more financial freedom to allocate funds to the needs of the people of Sint Maarten,” CFT said on Wednesday.