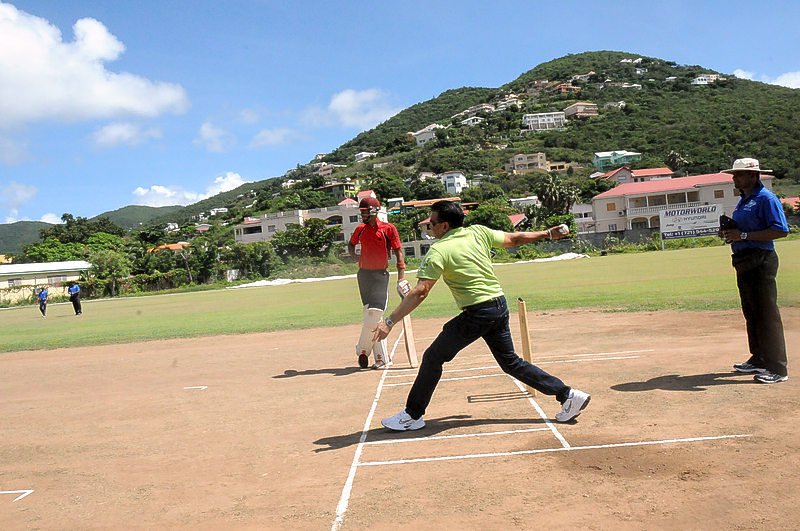 CUL DE SAC–The Caribbean General Contractors (CGC) Spartanz proved too good for NAGICO United Cricket Club in the featured match on the opening day of the Motorworld Twenty20 at the Caribe Lumber Ballpark on Sunday.

After winning the toss, the Spartanz decided to bat first and posted a below par score of 122 all out with one ball to spare. That total proved insurmountable for the usual powerful NAGICO batting line-up. The Spartan won by 29 runs.
The giant insurance company team never found any rhythm in the chase which was not helped when explosive batsman Stephen Evans (18 off 19 balls) was dismissed via the run out route with 27 runs on the board off 6.3 overs. And then, six balls later, the Captain in Romain Doodnauth played down the wrong line and was bowled for naught.
With the pressure rising, and Evans opening partner in Dwayne Elgin unable to shift in overdrive, Lionel Ritchie (four off six balls) skipped down the pitch and missed a turning ball off left arm spinner Daryl Doram.
Elgin (18 off 30 balls) perished from a direct hit from Sherwin Peters off the long off boundary as he and Don Farrell tried to complete two runs. From there on, a processional of batsmen ensured that the Spartanz increased their dominance over NAGICO but also sent a strong message to the other teams about their will to win from all situations.
Doram finished with four for 20 off 3.5 overs. The figures for the other wicket takers were Arif Khan with two for 14 in four overs, Peters with one for 12 off four overs and Daniel Doram with one for 22 off four overs.
Spartanz’ 122 was built around a top score of 45 off 31 balls (6×4, 1×6) by Sherwin Peters while the next batsman in double figures was Daniel Doram with 22 off 17 balls (2×4, 1×6).
Farrell accounted for the wickets of Akeem Charles for five, Damien Williams for naught and Damion Beckford for seven in a stingy spell of off spin bowling.  His celebrations after collecting the first two wickets burnt up a whole week of calories. He registered figures of three for 17 while Doodnauth collected three for 15 in three overs.
In the morning match, Future Champs thumped KFC Twisters by seven wickets.
The Twisters meandered to 119 for seven in 20 overs. Kern Saunders slammed 33 off 34 balls (5×4, 1×6) to keep the top half of the innings together while Captain Amos Bruney rallied the bottom half of the innings with 23 off 26 balls (1×6).
The main wicket takers were Antoine Johnson with two for 16 off three overs and Mrinal Wadhwa with two for 22 off four overs.
In response, Shadrack Descarte entertained the crowd with a scintillating 66 off just 46 balls. He hit three fours and four sixes with some clean shots. He showed a liking towards the fast bowlers; although, Merwin Vallet with one for 30 off three overs and Troy Toney 2-0-16-0 bowled hostile spells at him.
The Motorworld Twenty20 continues on October 8 when Future Champs take on NAGICO from 2:00pm and on October 9 when Masters do battle against General Auto Repairs Kaieteur from 10:00am and CGC Spartanz match skills with WINAIR Conquerors from 2:00pm.