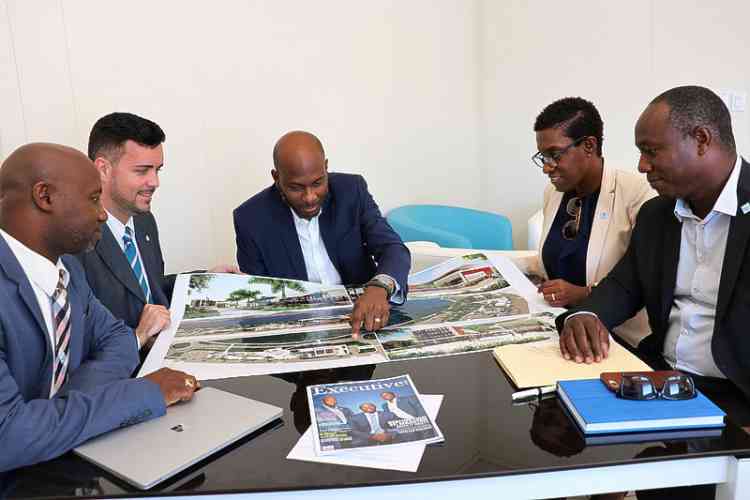 PHILIPSBURG–The St. Maarten Chamber of Commerce and Industry (COCI) is expected to break ground for the construction of its Economic Service Centre (ESC) on Walter Nisbeth Road near the former Air Lekkerbek restaurant by the end of this year.

Plans for the ESC are currently being finalised. Once completed, it will be an eco-friendly and state-of-the-art facility with 18 lease-to-own units that small businesses will be able to lease or purchase outright to expand their business and increase their customer reach. The facility will have more than 97 parking spaces with a full-service office from which COCI will offer improved customer service.

COCI presented its plans for the development of ESC to Minister of Tourism, Economic Affairs, Transport and Telecommunications (TEATT) Stuart Johnson during a meeting on Tuesday, October 16. Representing COCI at the meeting were Executive Director Anastacio Baker, board President Stanley Lint, Vice-President Benjamin Ortega and board member Pamela Illis-Friday.

Lint indicated during the meeting that he wanted to re-establish a close working relationship with government, which he said had been fragmented for some time.

Johnson said the ministry will do its part to ensure that COCI remains a crucial partner in the redevelopment of St. Maarten.

COCI has also proposed the establishment of a Think Tank from which the business community can brainstorm ways for the economic revitalisation of the country and urged Johnson to ensure through his Ministry that COCI remains part of the economic recovery plan.

Johnson elaborated on the economic development plans for the country and asked whether COCI had considered engaging its members in activities aimed at redeveloping Philipsburg. He said putting life back into Philipsburg is a significant part of the economic recovery initiatives his ministry is undertaking during the recovery phase.

“Economic recovery, in general, requires a collective approach to creating solutions to fill the economic void that presently exists and to stimulate activity in Philipsburg. It cannot be business as usual and the government simply cannot do it on its own,” Johnson said in a press release on Sunday. “It would take the full cooperation of all businesses and organisations to achieve the level of economic activity the island so desperately needs.”

He said he was encouraged by COCI’s report on its strategic plans to improve the way business is done in St. Maarten. “The development of new business and redevelopment of businesses that suffered a significant loss when Hurricanes Irma and Maria struck the island is the most critical aspect of our economic revitalisation plan and the sustainable economic future of St. Maarten.”

It is especially commendable that COCI had reached out to other associations on-island and in Curaçao and Aruba that represent business interests to find ways of connecting their members with the resources and information needed to enhance their product and service levels.

Lint spoke briefly about COCI’s Strategic Plan 2020, which aims at ensuring that COCI regains its relevance through improving processes, services and providing follow-up on action items, rather than leaving great ideas on paper and never acting on them.

Johnson said COCI’s role in the redevelopment of St. Maarten post-Irma “is indeed critical” and commended Lint and the board on their initiatives to ensure that COCI remains relevant and remains part of the discussion on the economic future of St. Maarten.

Because the Chamber is required to provide the service of navigating government complexities for its members and because it acts as the leading voice in raising its members’ concerns, “we as a government are very interested in hearing what the Chamber has to say,” Johnson said.  He said COCI has to continue to be seen as an extension of the business community and as such “its words should be viewed as being the concerns of the business community.”