Home Local News Changing of the guard at Dutch Representation 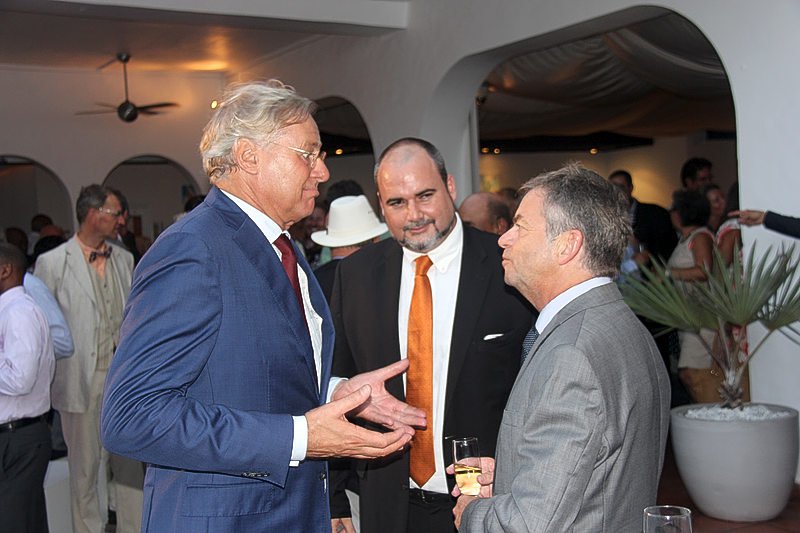 Both have been working at the Dutch Representation for the past three years and six months. With their departure, the Representation will be losing two-thirds of its staff, with only office manager Anoushka Devid remaining.
Versluis will be retiring, whereas Van der Lee will be “moving on” to the Netherlands.
The Dutch Ministry of Home Affairs and Kingdom Relations appointed Saba Commissioner Chris Johnson (38) as the new head of the Representation of the Netherlands in St. Maarten as per June 1. In this capacity, Johnson will also be the Acting Representative of the Netherlands in St. Maarten.
Johnson, who has been active in Saba politics since 2007, was introduced in his new capacity during the reception, which was attended by a host of dignitaries, Governor Eugene Holiday, Minister of Finance Richard Gibson, and Minister of Public Health, Social Development and Labour Emil Lee, among them.
Saba was also well-represented with Commissioner Bruce Zagers and former Commissioner Will Johnson heading the delegation from the sister island.
As Commissioner of Constitutional Affairs Chris Johnson has played an important role in the negotiations which led to the constitutional changes of October 10, 2010. Under his leadership, Saba became a public entity of the Netherlands.
Johnson, who is married and has three children, will be moving to St. Maarten to take up his new job.
Versluis has been the Dutch Representative in Philipsburg since January 1, 2013. The Dutch Representative in Aruba, Curaçao and St. Maarten Henk Brons described him as a “no-nonsense economist” and a “resolute civil servant,” who was not afraid of a discussion.
“Stern when necessary and constructive where possible in the relation between the Netherlands and St. Maarten,” said Brons.
He said Versluis had been an “advocate” of St. Maarten, also where the “hot dossiers” of safety and security and integrity in government were concerned, and said he had made a “flaming plea” to deal with climate change and environmental problems on the island.
Brons deemed Johnson’s appointment as Dutch Representative significant for the relation between the Netherlands and St. Maarten. He marked Johnson’s roots, experience and network in the region as an “added value.”
In her at times emotional farewell speech, Van der Lee gave a little insight in the very diverse and dynamic world of the Dutch Representation, which not only serves as a front office for the Dutch Government, but for instance also performs consular duties, serves as a polling station during elections in the European Netherlands, and provides aid to Dutch people in problems.
Van der Lee has also been the driving force behind the annual King’s Day Free Markets at Emilio Wilson Park.
Johnson is making a career switch from politics to the civil service. “I intend to become a good civil servant,” he said.
Johnson said he was welcomed with open arms when Versluis introduced him as his successor to ministers, government officials and institutions on St. Maarten.
Johnson said his appointment as Dutch Representative made him feel honoured and proud. “It shows that people from the Windward Islands are also able to move forward and obtain a high position.”
In his farewell speech Versluis stated that St. Maarten needs more stability and participation. “Since I was here, St. Maarten had four cabinets: three by ship-jumping, and one by election. That’s a thing we could not understand. The results are poor. I am really worried about the standstill in this country,” he said.
On a positive note, Versluis said a “silent” fundraiser has made it possible to carry out highly-needed emergency repairs to the foundation of Fort Amsterdam. Work can start as soon as the Department of Education, Culture, Youth Affairs and Sports (ECYS) issues the required permit, said the outgoing Dutch Representative.

Source: Daily Herald
Changing of the guard at Dutch Representation