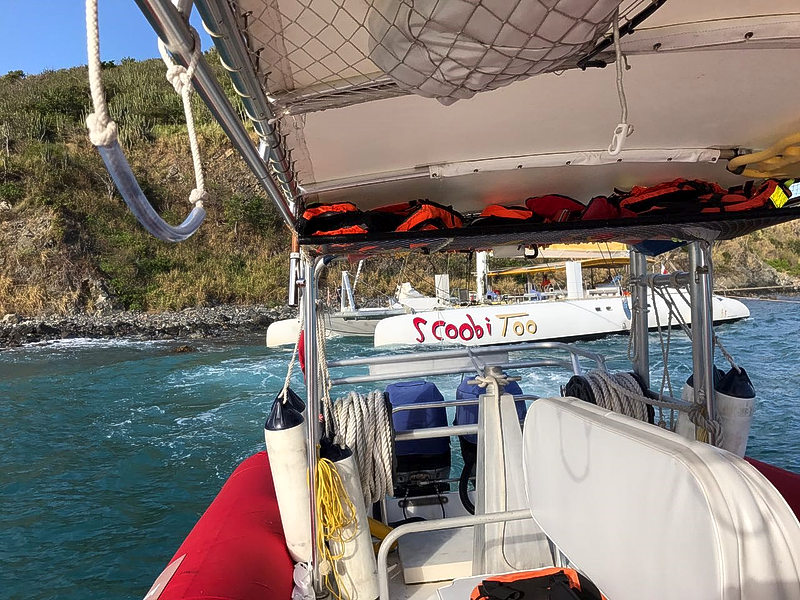 MARIGOT–Well-known French-side based charter catamaran Scoobi Too was finally pulled off the rocks on Thursday, after the 75ft vessel broke away from its mooring in the bay of Anse Marcel during the night of Monday to Tuesday.

The catamaran had drifted onto a rocky shoreline and remained there for two days as attempts to pull her off using the tow lines from a number of different boats initially failed.

In a show of solidarity many vessels converged on the scene to help. These included French-side sea rescue volunteers with their RIB Rescue Star, who were the first to arrive on Tuesday morning with pumps, private boats, a cargo boat called Oceana, French Customs vessel Soualouiga and vessels from Réserve Naturelle and the Anse Marcel Marina. In addition, Antoine from the Geminga boatyard brought divers and equipment.

In the end it was the French customs vessel that managed to free the catamaran, which was then towed to JC’s boat yard in Sandy Ground. Owner Stéphane Mazurier said Friday the starboard hull of the catamaran was badly damaged.

“I have no idea when we will be back in the water, but first we have to inspect the damage to see how bad it is,” he said. “So many boats came out to help us, it was amazing how the word spread on social media and I cannot thank everyone enough.”

Mazurier said he had no idea why the catamaran had broken away from its mooring as it was normally very secure and regularly checked. The same mooring had been used during Hurricane Gonzalo and it did not fail then, he noted.