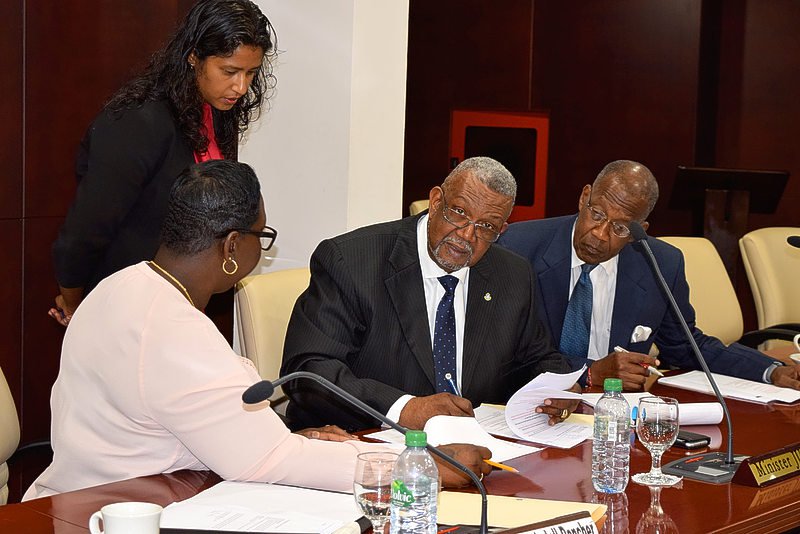 PHILIPSBURG–Politicians who distribute chicken legs and johnny cakes to voters should beware of getting entangled in vote-buying.

Justice Minister Edson Kirindongo told Members of Parliament (MPs) on Monday that giving out what is considered a local staple “can be considered vote buying or promise in light of Article 2:44-1 [of the Penal Code – Ed.]” if the person giving out or buying the meal is seeking to sway the voter to cast a ballot in a particular way. United People’s (UP) party leader MP Theo Heyliger had asked whether giving out a chicken leg and johnny cake would be considered breaking the law.
Kirindongo was in Parliament to continue a discussion about his Ministry’s policy on vote-buying. The meeting was requested by opposition Super Seven MPs to get a clearer picture about how vote-buying is defined and will be tackled by the Ministry as the September 26 Parliamentary Election approaches.
In answering another question, the Minister said the purchasing of an airline ticket for someone residing overseas to come back to the country to vote is not considered vote buying. However, the premise changes if the ticket was bought to influence the recipient to vote or not vote for a particular candidate or party.
National Alliance (NA) Parliamentarian Rodolphe Samuel had asked the Minister in the first round of the meeting in May whether Government rendering social assistance could be considered vote buying. Kirindongo said, “Giving social assistance is not buying votes. [But] giving social assistance with the intention to influence the one who is receiving the assistance to vote or not to vote for someone or a party, that is vote buying in light of Article 2:44-1.”
MPs called on the Minister to issue guidelines for the election campaign and election day ahead of Nomination Day in August. In the 2014 election, guidelines came after nomination day and threw into question whether already erected posters and billboards were within regulations among other issues.
Responding to what is considered a gift under the law, Kirindongo said, “Anything you receive can be considered a gift.” However, he further explained, that in light of Article 2:44-1 of the Penal Code, a gift or promise under the law “has to be related with the intention to influence a person to vote or not vote for a certain candidate or party.”
The Minister told MPs, “It is not the request that is considered legal or illegal, but the intention behind the request. The time to consider the promise legal or illegal is not bonded to a time.” On this specific topic, MPs had asked how far back a request or promise can go in the legal sphere.
Vote-buying as defined by the law is bribing another person by means of gifts or promises. Under the Penal Code both the vote buyer and the seller are criminally liable with a penalty of imprisonment, not exceeding two years and a fourth category fine totalling NAf. 25,000.