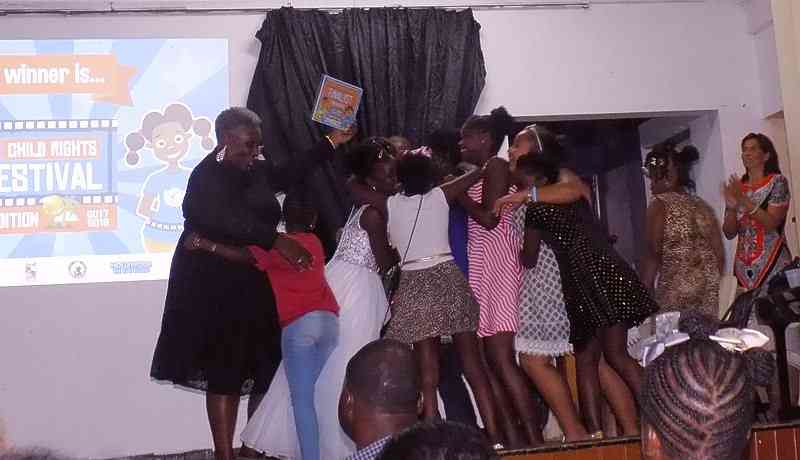 During the evening, monitored by Director of Rights of the Child on St. Eustatius Cherida Creebsburg, six short films on child rights were screened for the first time.
A kingdom-wide film production project was launched on Statia in conjunction with MYF’s and DOTK’s children, who worked hard to create the films.
Children between the ages of nine and 12 years old, including some of the evacuated children from St. Maarten after Hurricane Irma, made drawings of how they understood their rights following a lesson on the subject.
The children worked in teams to make videoclips of six of the best drawings. They also helped to create the script, chose their own props and did all the acting.
The air at the Film Festival was filled with energy as the children were very excited to present their films about child rights to the audience. The evening in celebration of child rights was filled with film, theatre and music, produced by MYF.
“Every child and young person has rights, no matter who they are or where they live,” said UNICEF Senior Child Protection Advisor Dirkje de Jong.
She said the Film Festival is part of the larger children’s rights approach of UNICEF Netherlands, the Public Entity St. Eustatius and the Ministry of Home Affairs and Kingdom Relations to support professionals, parents and children to further improve the child right situation in the Caribbean Netherlands.
De Jong was presented with a token of appreciation during the show, which also featured a slew of performances and skits from a multitude of talented individuals and groups.
The Historical Foundation Simon Doncker Club also put on a skit entitled “Stop Child Abuse,” and was presented with a cheque.
A jury comprising Robinson Hercule, Rachel Crowe, Nadia Turner, Suyne Robins and Guitiano Lopes judged the films on their merits.
The judges said that all films were very good but declared the film about the right to education by “Jungle Cats” the winner of the competition with their movie “What Goes Around Comes Around, Stop the bullying,”
The other movies highlighting different child rights were titled “Queen: Education unlocks treasures,” “Be a Buddy, not a Bully,” “No drugs or Drug Trade,” “Smoking is not Good” and “Say No to Drugs,” “Kid’s Council,” about freedom of expression and speech and “Protection Against Fear and from War.”
Commissioner Derrick Simmons made the presentation to the winners and congratulated them. Keynote speaker, former American Idol contestant and Girl’s Talk representative Nadia Turner said she loved being a part of DOTK’s and MYF’s projects.
“These organizations help children to reach their full potential. I love what they teach and that they are trying to discern what is in their heart…Every child has a voice and has the right to be heard,” she said.