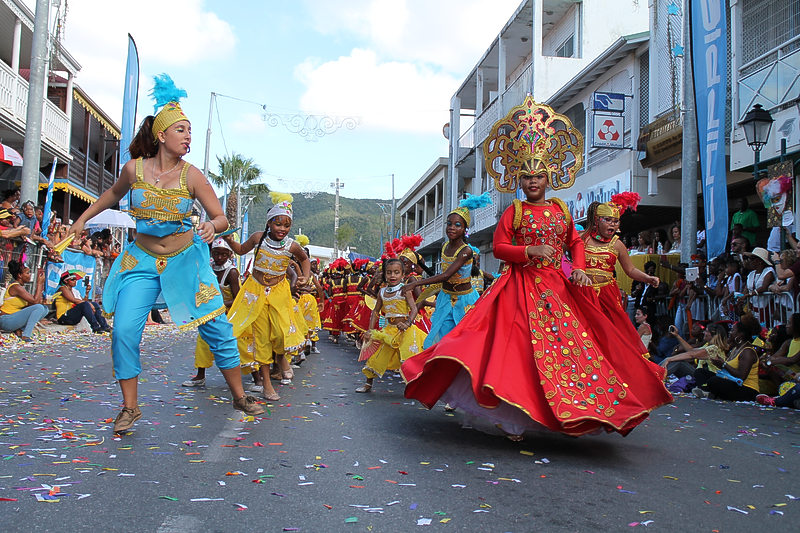 MARIGOT–The hard-working French-side Carnival committee had little time for rest to organise Sunday’s Children’s Parade after Saturday night’s Individual Carnival Costume Competition debuted on the waterfront, results of which will be announced later in Carnival Village.

Committee members were re-energised and got Sunday’s parade off to a reasonably prompt start from Louis Vanterpool Stadium just after 2:00pm for the usual circuit along Rue de Hollande, Rue de la République, Rue de la Liberté, Rue Kennedy, Rue de Hollande and the finish at the stadium.

Several Dutch-side Carnival committee members were seen assisting the organisers Saturday night and Sunday. The streets were lined with many spectators, locals and tourists.

Caisse Territorial des Oeuvres Scolaires (CTOS) and its after school programmes were largely responsible for mobilising the schools to organise troupes for Carnival this year and Sunday saw 10 troupes on the road.

This year’s theme was “Seven Wonders of the World.”

Points were awarded in a range of criteria for troupes, floats and choreography.

After each choreography segment was finished on Rue de la République each troupe received a round of applause from the crowd and a shower of confetti.

There was a halt in the proceedings for about half an hour when a tourist spectator collapsed and the ambulance was called. According to the Carnival committee the woman was a diabetic, but she was taken care of and recovered.

The parade was made possible by the Collectivité, Soundmasters and staff, DJ Rudeness, CTOS and the afterschool programmes, the judges and the schools.

The Sandy Ground Cultural Centre was celebrating 27 years of Carnival and has been participating in the Children’s Parade since 1990.

Today, Monday, is the official opening of Carnival Village in Galisbay at 8:00pm. On Tuesday, February 21, Raw Productions and FCDSM present the Calypso Tent in the Village.