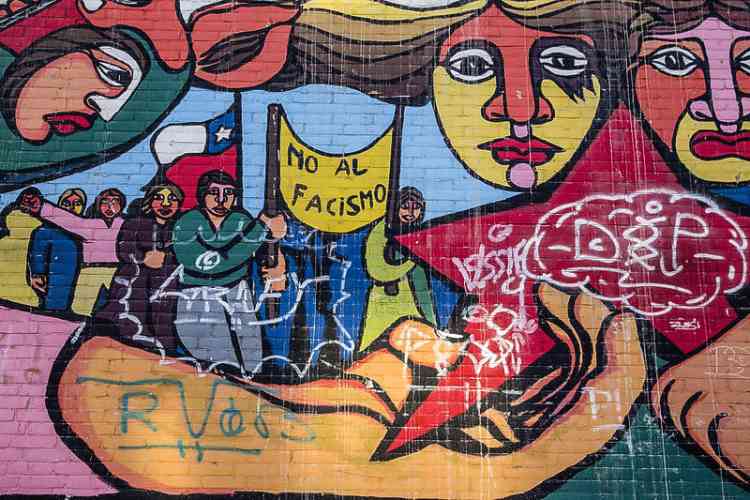 The rediscovered mural made by Chilean artists in the Amsterdam district of Osdorp in the 1980s. (MRP Development photo)

AMSTERDAM–A large mural painted by refugee Chilean artists in the 1980s has been rediscovered in the Amsterdam district of Osdorp. The painting came to light during demolition activities in the district. The fact that it was hidden from view for a long time ensured it survived intact.

“This is a very well-timed surprise,” artist Jorge Kata Núñez (65) told Het Parool newspaper. Núñez, who happened to be in the Netherlands when the mural was found, was part of the collective Brigada Ramona Parra, which painted some 60 murals in the Dutch capital, most of which were eventually painted over.

Project developer Annemieke Witteveen, who discovered the mural, said she immediately went about looking for more information and was told the images were typically Chilean.

Witteveen contacted Rotterdam Centre of Art and was told that, by happy coincidence, one of the artists in question was in Rotterdam to restore another work of art.

The images in the painting refer to the dictatorship of general Augusto Pinochet, who came to power in 1973 by killing President Salvador Allende, and torturing and killing thousands of his supporters.

“All my works are filled with emotion and passion but the murals even more so,” the artist told the paper. “The horse’s head, for instance, symbolises the power of the people. The man and woman who are lifting a star together represent hope.”

The project developer has said she wants to change the current building plans for a new city council office to include the mural.