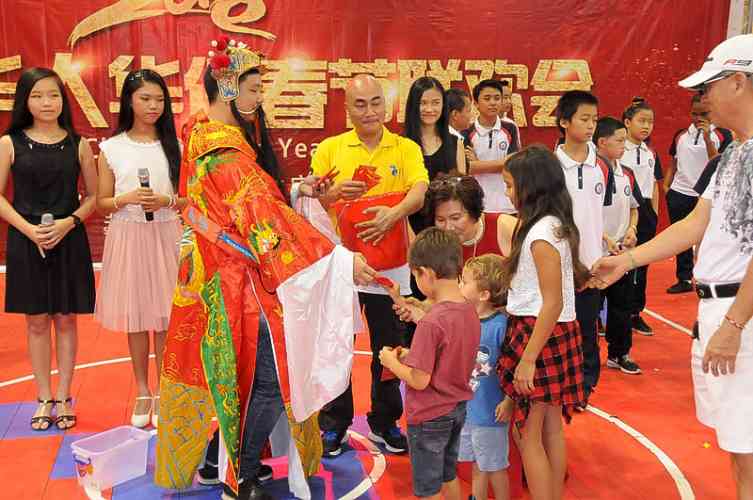 PHILIPSBURG–Sunday was a strange day for residents who are used to going to their corner Chinese grocery or restaurant and meeting it open and ready to serve, but the St. Maarten Chinese community foundation hosted a parade and manifestation to bring in the Chinese New Year which began on Friday worldwide.

Hundreds of Chinese nationals gathered at LB. Scott Sports Auditorium on Sunday and watched a performance programme put together by the local Chinese foundation. Government officials were present along with guests invited by the foundation. Police community officers received a donation from the foundation during the event.
The Chinese zodiac moves in a 12-year cycle, and those born in 1958, 1970, 1982, 1994, 2006, and 2018 are also known as Dogs. Chinese families gather together for a reunion dinner on New Year’s Eve, and clean their houses to sweep away bad fortune on New Year’s Day.

Traditionally, children would be given red envelopes stuffed with “lucky money” and positive wishes on New Year’s Day. Some teens now have red envelope apps, so their relatives can transfer cash digitally.

The celebrations will last for over two weeks if you fancy making a trip before the festivities end worldwide. However, on the island they celebrate just one day.
The Chinese New Year’s Day normally falls between January 21 and February 20, and 2018 is the Year of the Dog. According to Asian astrology, your year of birth – and the animal this represents – determines a lot about your personality traits. Although each of the 12 animals gets an outing every dozen years, there are different varieties, and 2018 will be the first Year of the Earth Dog since 1958.

Anyone born in an Earth Dog year will be communicative, serious, and responsible in the workplace.