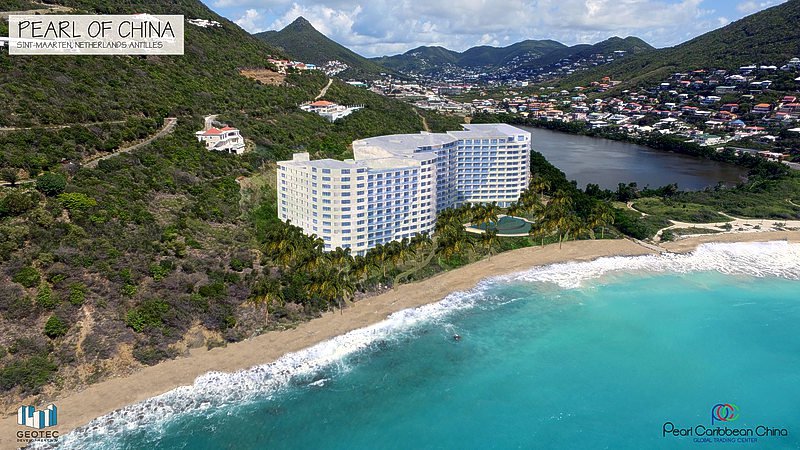 LITTLE BAY–The idea of the Pearl of China project is to make St. Maarten “the Caribbean centre for conventions and tradeshows” for Chinese businesses and products similar to the kind of business carried out in Las Vegas, Nevada. That was the description given by Cengiz Kucuk, local representative for the massive project planned for Belair beachfront.

The 326-room hotel with showroom and 450 apartments will create employment and business for the country, Kucuk, founder of Caribbean China People Foundation told The Daily Herald. “Time will tell about the jackpot the Minister [Richard Gibson Sr. – Ed.] was talking about,” he added.

“This is not direct tourism. We will not compete with any other resort … We are not in the vacation destination business … this project will bring a lot of good to the people and the country,” Kucuk said. “There are opportunities for employment for local people … Lots of subcontractors will get jobs. I mean they will not bring the people from China to do the hotel work.”

“The aim is to do conventions like Las Vegas. Imagine a Chinese company coming with 200 people and other people come here to meet them to do business. This is about face-to-face business. People can come to the showroom and see the products they can buy,” Kucuk said.

Instead of businesspeople going more than halfway around the world to China, Chinese businesses want to come closer to this potential market. St. Maarten was selected as the “perfect location” for this venture by Chinese developer Trey Cui of New Lifetown Limited Beijing, the private sector branch of the US $100 million project slated for ground breaking on Saturday, September 17.

Kucuk represents Cui in the project in which the Chinese Government also has a stake. Locally, the project is under Universal Light Real Estate NV and will be executed by Global Light Development NV.

The idea for such a project has been around for some 15 years. Realisation of it is coming now, because Cui, the private sector developer, spent two years exploring the possibilities of the island and was wooed by its duty-free status, top rated port and an airport that’s a region hub.

Cui is known on mainland China for building new cities. This is his first project outside of China, according to the local representative.
The Pearl of China Project has “nothing to do” with the 50 per cent sale of NAGICO Insurances to Peak-Re, a Hong Kong based company, he emphasized. The Pearl of China project developer is from “mainland China.”

New beach
The “compact building” of 12 storeys will not hamper the Little Bay Pond, because the pond is not on the former Barbaron property. The pond belongs to and sits on a property belonging to a Venezuelan group by deed. That group is not connected to the Pearl of China project that covers 36,000 square metres of land.
The land for the project will be accessed via Chopin Road (behind Learning Unlimited Preparatory School).

Beach replenishment will be undertaken by the developer to widen the strip of sand and rocky shoreline. This undertaking will be an added value for the convention-driven project and for the country, said Kucuk.

Though the ground breaking is on Saturday, Kucuk, who was the operator of Dolphin Casino, said the actual construction will start in January and will take some 20 months to be completed.

“The idea is to connect China businesses with St. Maarten and Caribbean businesses,” Kucuk said. This approach is in keeping with China’s policy of getting closer to the wider world.

Protest
The development has drawn much outcry from the public since it was announced more than two weeks ago by Finance Minister Richard Gibson Sr. (National Alliance) at a town hall session dealing with the topic of inequality and demand.

An online petition with the aim to haul the project has garnered close to 700 signatures. The petition describes the project as “secretly negotiated” by two Ministers with the Chinese Government and private sector representatives of that country.

The petition is available via: www.gopetition.com/petitions/objection-to-the-chines-project-in-little-bay-st-maarten.html

Several persons have also submitted written objection to the planning permit request that is on public review at the Ministry of Public Housing, Spatial Planning, Environment and Infrastructure VROMI. Objections can be filed until the end of the month.

Members of Parliament (MPs) Sarah Wescot-Williams (Democratic Party), Maurice Lake (independent) and Silvio Matser (independent), who are coalition partners of NA have questioned the project – They have claimed the project was never discussed with them.

Nature Foundation has also questioned the project and pointed out that the area chosen is a designate birding watching zone and the habitat of a number of birds and other wildlife.

The St. Maarten Hospitality and Trade Association (SHTA) has submitted a number of questions to Government seeking clarity on the project.