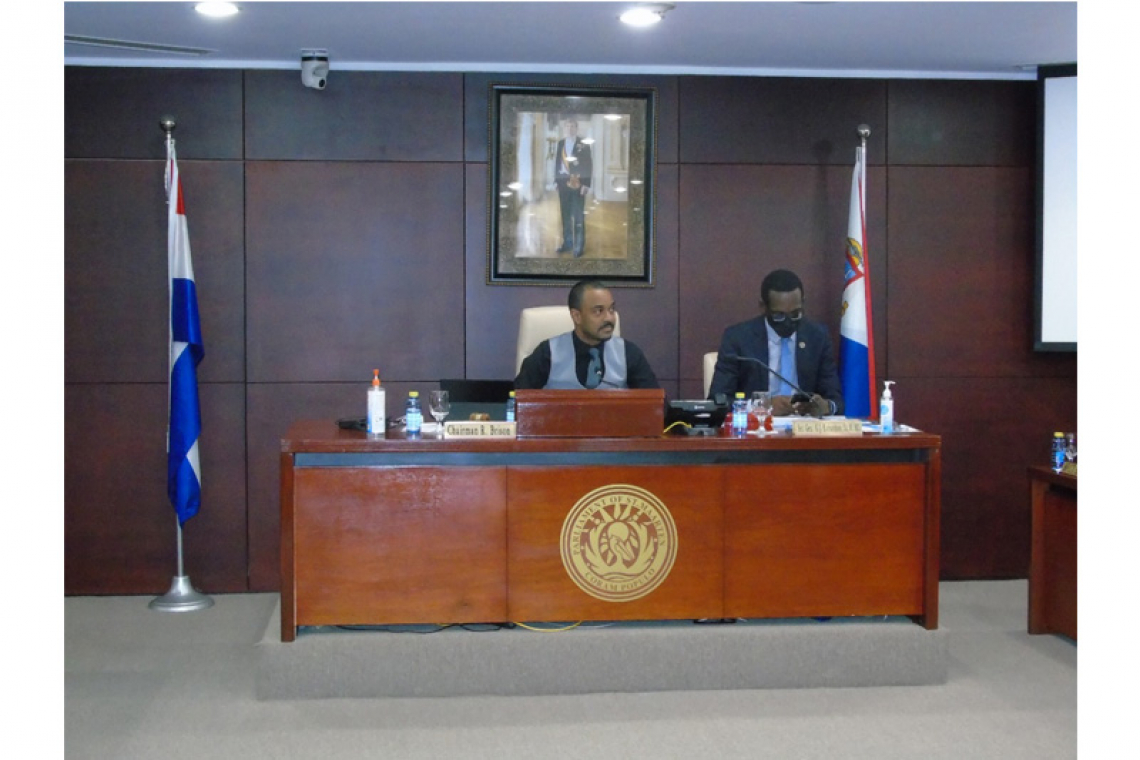 PHILIPSBURG–While independent Member of Parliament (MP) Christophe Emmanuel has given the government of St. Maarten a failing grade for its performance, saying it is the “worst government in the history of St. Maarten,” backed by a “bad Parliament,” Chairperson of Parliament Rolando Brison said the one-man faction in Parliament is ineffective and did absolutely nothing.

The exchanges occurred during the respective speeches by the two MPs during the closing of the 2020-2021 parliamentary year on Monday.

Emmanuel said that while it had been a tough year for Parliament and for the government coming out of Hurricane Irma and falling into the COVID-19 pandemic, a majority in Parliament supported “the worst government in the history of St. Maarten.”

He said parliament equates dissent with loyalty. While it had been a tough year, Parliament, Emmanuel said, had increased the pension age; “trampled” on the benefits of workers, civil servants, government- and semi-government-owned companies and supported a 12.5 per cent cut for hard working persons.

“Parliament supported ministers who seemed to have a “hard one” for justice workers, he claimed. He accused the parliamentary majority of supporting a prime minister who “embellishes”, is “never forthcoming and lacks transparency.”

Parliament has also caused a large group to have to march and protest “for what is rightfully theirs.” It is difficult, he added, for people to pick out the good that the legislature has accomplished for the country in the past parliamentary year.

While he can understand the pressure and the liquidity situation, Emmanuel said it seems that Parliament has decided to go along just to get along, adding that society is suffering due to lack of leadership from both Parliament and government.

“We have seen a Parliament that supports a government that has no plan or no vision, that up to this present moment simply can’t level with the people of St. Maarten. … Is it that our backs are against the wall or is it that things are looking up. Which one is it?

At the end of the meeting Brison took aim at Emmanuel’s statements. “The irony does not escape me that we have a one-man faction that can say “this government does nothing” and yet this statement comes from the one faction who, in my view, has done nothing. If I was such a faction leader today, I won’t use 15 minutes here today to talk about how bad a government is, without first reflecting on how ineffective I am as a parliamentarian,” Brison said.

“Reference is always made of how, when we were in opposition, we criticised the government heavily. But that is only half the story. Because when the Leona government was laying the groundwork for the difficulties that the current government faces today, I didn’t sit down, do nothing and have my staff write press releases.

“No, I got up and asked myself ‘what can I do?’ And so, I read my constitution. The one we swear to uphold. Which gives us rights to bring laws, bring amendments, interpellation rights, inquiry rights. So, we have to ask ourselves, what have we done?” Brison asked.

Brison said that for most of the faction leaders, the level of representation, and more importantly, the level of work being put in, is very clear and commendable from his viewpoint as chairman. For at least five of the six factions in parliament everyone has presented amendments, motions, has chaired meetings in their respective committees across opposition/coalition lines and other real initiatives that are being upheld by the government.

“Things that have resulted in real change for the country. Budget amendments, technical amendments, an initiative law to ban the use of single use plastics, motions to establish the positions of parliament, a real effort to finally get a new parliament building and move us from paying rent to instead owning, petitions to actually at the highest level establish what the rules of the game should be within the kingdom.

“While we don’t always agree on everything, the work being put in is there for the most part,” Brison said.

Emmanuel had said that things are getting tougher for residents and people want to know in what direction the country is headed. Emmanuel believes that Parliament has failed the country. He chided the chairperson of parliament for deciding to party with basketball players instead of travelling to represent the county and added that MPs know better, but did nothing when they realised that “their MPs” were also partying at the same time.

Emmanuel went as far as saying that Parliament supports a government that puts its people on “death row” and hopes people will give them clemency.

He said Monday had been a good day, as it was a day where the chapter of the parliamentary year can be closed, as it had been a bad year with a bad Parliament and a destructive government.