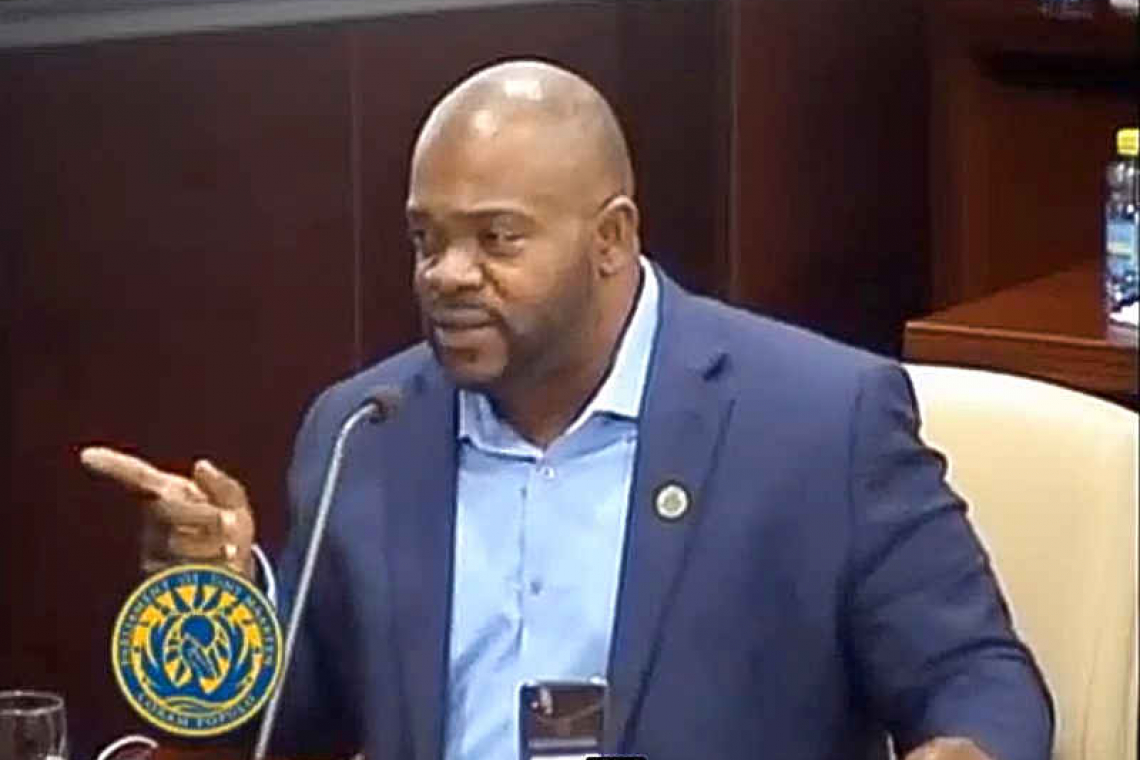 PHILIPSBURG–Independent Member of Parliament (MP) Christophe Emmanuel is extremely concerned about complaints he has received about the tendering process to award new waste disposal contracts. Emmanuel said that if some of the “very worrying” information he has received is true, legal challenges and consequences could follow, casting doubt and suspicion over the entire tendering process.

He said complaints over the past week have ranged from the process being rigged in favour of some, to bids being changed illegally and no transparency extended to companies. The situation has reportedly also resulted in at least two senior Ministry of Public Housing, Spatial Planning, Environment and Infrastructure VROMI officials on the bid evaluation team distancing themselves from the process in writing. All bids had to be submitted by 10:00am Tuesday, February 2.

“If any bid was changed internally after that time, it would constitute a punishable illegal act,” Emmanuel said, adding that it behoves the VROMI minister to provide clarity to the public, to be transparent about who were awarded the bids, and to indicate beyond a reasonable doubt that all documents are in place and no changes were made after the fact.

“There are reports that orders to change bids came from the top. These are serious charges to make. I am not accusing anyone of anything, but people have questions and they must be addressed to protect the integrity of the process. This includes the Council of Ministers speaking to the members of the bid evaluation team from the Ministry of VROMI,” he said.

Another point of contention for some companies was the reported removal of certain bid criteria, then having the same criteria re-inserted.

“These alleged inconsistencies leading up to the bid have contributed to the suspicion of wrongdoing in the process. I would assume that the tender terms of reference and other documents were vetted prior to the start of the process. So why all the reported inclusions and exclusions?” Emmanuel asked.

In the information meeting about the tendering process, it was stated that this performance guarantee requirement would not be included. This was welcomed by the smaller and newer companies. However, when the minutes of the meeting were presented two weeks later, VROMI indicated that it would indeed be included in the terms of reference. The smaller companies saw this as a disadvantage, as it created an unfair playing field for newcomers.

Emmanuel recommends that the Council of Ministers should seek to “freeze all movement of those tender documents” and conduct its own enquiry to settle any suspicion.

“This is important, because if indeed bids were tampered with, it would not be fair to most if the entire tender has to be re-done. Pricing at this point would be known by all for specific bids. An independent firm should also be commissioned to look at the bids to assure ultimate transparency and if the process was followed correctly,” he said.

He said allegedly companies are already mobilising to execute contracts after having been informed that they won the bid. There has been no public announcement or information from the minister of VROMI or the VROMI Ministry about the awarding of contracts.

“In the meantime, others are still waiting on word and they want to be able to be shown or told why they were not chosen and why others were,” he said.

Additionally, the complaints to the MP included companies saying that they had been informed by VROMI personnel that they had won a bid for garbage collection for a particular district, only to hear later that it had been awarded to a different company.

Also of concern is how many contracts/parcels can be awarded per family or per household. Going into the bidding process it was stipulated that only one parcel/contract per family or household could be granted. If this stipulation were to change, it would require a decision of the Council of Ministers.

Emmanuel said he understood from the complaints expressed to him that this provision was entirely removed. It is unclear whether the Council of Ministers approved this change or the change was made by the minister alone. This particular point remains an issue of contention due to several parcels being awarded to family members in the past.

“There are concerns that these stipulations were not followed,” MP Emmanuel said.

Commonly called “garbage collection contracts”, the contracts are valued in the millions of guilders and awarded among various solid waste collection companies. The tendering process is supposed to be very strict and detailed with disqualifications commonplace due to lack of documents and missed deadlines.

The current contracts for the collection of solid waste in St. Maarten came into effect on April 1, 2016, for a period of five years (ending March 31, 2021). For these contracts, St. Maarten was divided into eight parcels to execute the work. The scope of the works of the current contracts includes the collection of solid waste as well as the cleaning of the public areas and neighbourhoods.

According to the Terms of Reference for this new bid, the eight parcels have been changed to seven for better management, efficiency and control of execution of the works.