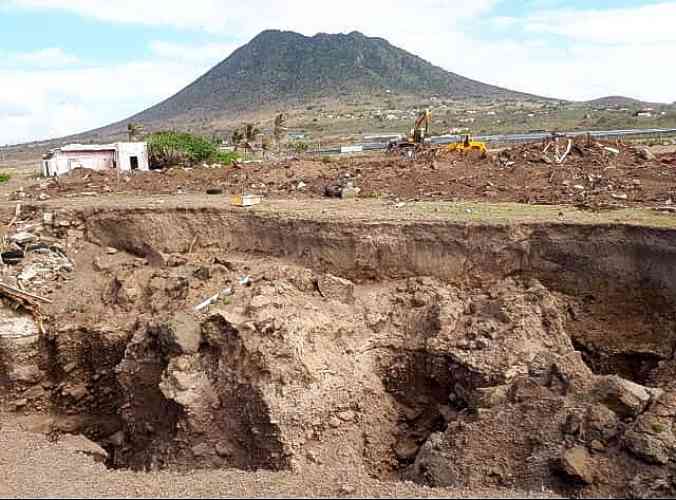 The Department of Spatial Planning and Management DROB clearing the illegal dump site on the cliffside at Lynch where the former dump site once was. (Public Entity St. Eustatius photo)

The project, funded by the Ministry of Infrastructure and Water Management, started in the second week of April. This week, workers of the Department of Spatial Planning and Management DROB were cleaning up the illegal dump site on the cliffside near the eastern coastline. This concerns the old dump site at Lynch.

The project is being executed by the Directorate of Economy and Infrastructure, in collaboration with Statia Waste Management Solutions.

“The impact and effect of these illegal dump sites are not limited to the environment, these also have serious consequences for the public health, which for me is the most concerning,” stated Government Commissioner Marcolino “Mike” Franco.

The ultimate goal is to adequately clean the areas and to properly dispose of all garbage materials. The sites will also be secured to prevent repeated disposal of waste.

The 13 new extraordinary BAVPOL police officers and environmental inspectors who were sworn in during March, will be tasked with carrying out controls and may impose sanctions or penalties on violators.

An information and educational campaign will be launched at a later date during which information will be shared publicly via workshops and other media.

The main objective of this project is the removal and relocation of unwanted debris and waste which will be taken to the recycling plant for processing. The stakeholders involved in the project believe that these actions will help cut down the amount of breeding grounds for mosquitoes, rats and other rodents and the removal of unsightly “blemishes” on the landscape.

The initiative is also a part of a plan to reduce the amount of flying debris, Styrofoam, plastic bags, leaking motor oil, as well as the contamination of the groundwater by various leaking chemicals.

Finally, the project hopes to deter these illegal dump sites from being utilized in the future for dumping and includes an information drive concerning waste management and the disposal of household and commercial waste.