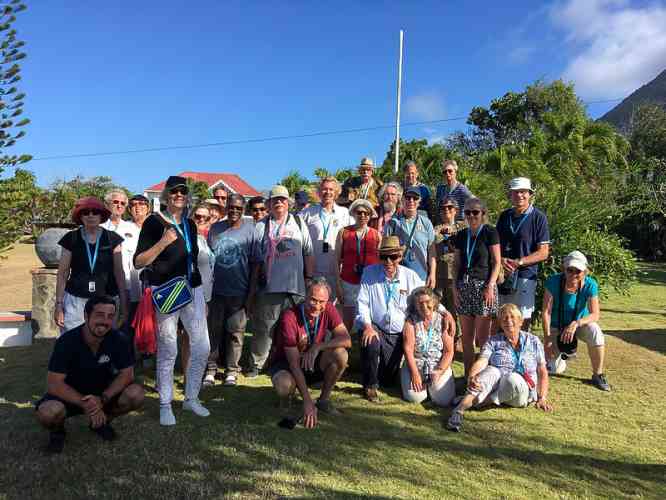 ST. EUSTATIUS–A cruise visit took place in St. Eustatius last week with the anchoring of clipper Stad Amsterdam. Built in the style of the 19th-century clippers and rigged with 31 sails, but with all modern comfort on board, the ship brought to Statia’s shores guests of travel agency Historizon that specializes in historical travel.

“The Historical Gem” was the third stop of the cruise, dubbed “Sailing through time in the Caribbean.” Also, on board was professor of Colonial and Postcolonial History at Leiden University and Director of Royal Netherlands Institute of Southeast Asian and Caribbean Studies Gert Oostindie. He had been asked by Historizon to give presentations on board about the cruise destinations. Since he knows Statia’s historian and Monuments Director Walter Hellebrand, he had asked him to give the visiting group a tour.

Hellebrand convinced them that a visit to Berkel Family Plantation would perfectly complement the walking tour of historical Oranjestad and visit to Historical Museum, so instead of returning to the ship for lunch, the visitors took along lunch packs so that they could make the most of their visit. The little square in front of Historical Museum was the ideal spot for their cold lunch.

The group was delighted with the “wonderfully situated and lushly blooming” plantation and the information Ishmael Berkel recounted about the time when Statia had to look after itself in the first half of the 20th century.
“A very different kind of cruise visit,” Hellebrand commented, “with lots of to-the-point questions from the visitors – both about the past and the present.”