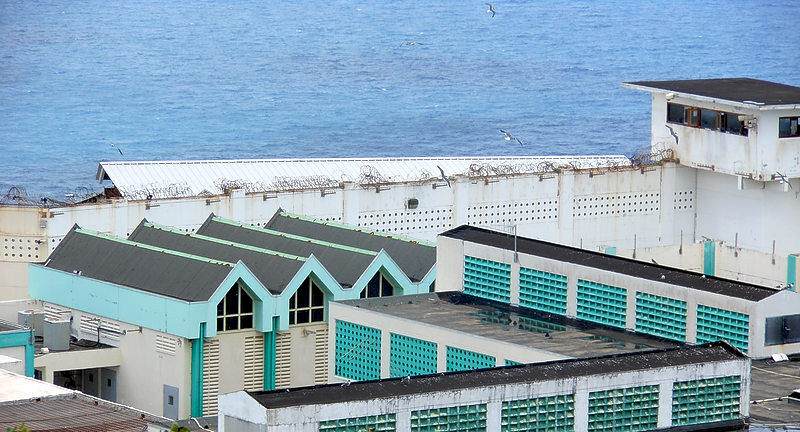 PHILIPSBURG–How can a loaded weapon make its way inside the prison? How long has the weapon been there? Are there any more weapons? These questions are on the minds of members of the community who may ask themselves, “What is going on at the local prison?”

The answers to the questions are still being sought by authorities, but it is important to take a closer look into the Pointe Blanche prison.

“No money, need more staff, facility upgrading,” are talking points when it comes to the prison for several years now. St. Maarten’s first Minister of Justice Roland Duncan had a plan to revamp the prison management back in 2012 and appointed Edward Rohan as the new Interim Director of the Pointe Blanche prison.

Duncan stated at the time that Rohan had been born in St. Maarten, but had worked at various prisons in the Netherlands over a 15-year-period. Rohan was said to have extensive training in Security Management and in the field of Prison Law and Management.

Rohan took the helm at the prison and tried extensively to straighten up the detention facility, but being understaffed and having security guards sometimes act as prison guards did not help with fully reforming the facility. The Daily Herald obtained several letters sent to Ministers of Justice over the years requesting assistance for the prison.

Two guns were found during a search conducted at the prison in September 2014. Investigations in the case did not yield any results and it was never solved.

Inmate Omar Jones was fatally shot in the head and back by a fellow prisoner on August 31, 2016. Multiple searches were conducted in the prison at the time by the Police Arrest Team and the K9-Unit conducted an extensive search and found a pistol far away from the scene where Jones had been murdered. The case remains open to date and no suspect has been charged for the murder.

Another gun was confiscated by authorities on Tuesday during a lockdown search at the prison, among other contraband found.

Based on information received about the presence of a firearm, police officers with support of the Royal Dutch Marines conducted thorough searches. The gun was found in a cell of recently convicted prisoner Renaldo “Reo” Reymond who received four more years in addition to the 16 years he already had to serve in prison for importing and selling weapons, drug possession and money laundering. The court gave its verdict on December 20 last year.

Two other prisoners who share the prison cell are also suspected of gun possession. Prosecutor’s Office spokesman Gino Bernadina could not say much because of the ongoing investigation, but he confirmed that three suspects are being looked at for gun possession.

Even though the prisoners are already detained for other crimes, the Prosecutor can add additional charges and treat them as suspects just like an outside investigation.

New Minister of Justice Rafael Boasman said he has the prison as high priority and spoke to Police Chief Carl John and Prosecutor Ton Maan last week about initiating certain security measures at the prison.

Boasman said during this week’s Council of Ministers press briefing that the searches were carried out as one of the new measures discussed with the police and Prosecutor’s Office.

However, these searches continue to strain an already strained Police Force that is also understaffed and has to deal with law and order on the streets of St. Maarten. The men and women in blue maintain the law and make several arrests on a daily basis.

The court plays a role afterward and a judge decides whether the person(s) accused is/are punished by going through a reform programme or sent to prison.

When guns are found in the prison, police have to disburse resources once again and solve the case, as they are the body that does the investigating on the island. The police should be able to trust a confinement facility for criminals in St. Maarten.

In an interview with this newspaper last year, Prosecutor Maan stated that he was “gravely” concerned about the situation in Pointe Blanche.

“The situation is not tenable much longer. In many aspects, the prison does not meet the requirements of the law and human rights. The safety of inmates and guards cannot be guaranteed. Time after time weapons are found in cells and for the second time it was proven that detainees have firearms in their possession. The Prison Director, mind you, is suspect in an investigation by the National Detectives.

“Slowly I start wondering whether it would still be justified for us as a government to send people to that prison,” said Maan in the candid interview.

P.J. served several years in the Pointe Blanche prison and is considered a regular guest there. Speaking to this newspaper, he claimed that connections are what keep you alive and living well in the prison.

“My first time going in, I was told to stay away from certain groups who control the prison. Gangs exist at the prison and if you look for trouble, they make sure deal with you straight,” he stated. “Nobody really respects management up there. Bewaakers [guards – Ed.] are pretty much your mother, father and brother in one. If they having a bad day, trust me, you having a bad day too.”

P.J. said weapons are thrown over the wall and sometimes, if you are lucky, when you get visitors it can be slipped to you by the person visiting.

“They have so many tricks to it, but it’s too much for the news, but there have been guns up Pointe Blanche prison for years. You know that you can’t f*** up; otherwise you will get dropped. The hiding spots in that place are unbelievable. Trust me, no dog or police officer can find what is up there,” he said.

The ex-prisoner also mentioned to this newspaper that the prison has been divided for safety purposes.

“They got the normal people on one side and the gays at the protective custody side. They stay on their side with their own kind and the other inmates stick on the other side. They don’t make the mistake to come to the side of the guys, because if they do, we deal with them proper,” he said.

Reconstruction of the entire facility could be an option for Justice officials, but lack of funds continues to be the institution’s biggest obstacle. Minister Rafael Boasman has his work cut out for him as he attempts to regain control of St. Maarten’s biggest detention facility and really make it a safe environment.