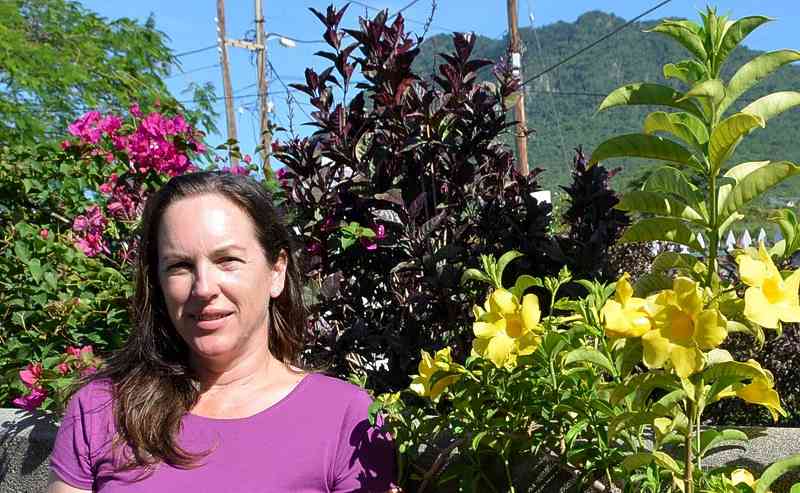 ST. EUSTATIUS–Terrestrial ecologist of Caribbean Netherlands Science Institute (CNSI) Hannah Madden spent a few years studying butterflies on St. Eustatius. She compared the butterfly fauna of Statia to those of nine adjacent islands of the Lesser Antilles. Madden had some good news to share but also a concern for the future of these winged insects during last week’s Science Café.

The good news was the addition of seven new species to Statia’s butterfly list, bringing the total number to 32 species.

“Small islands in the Caribbean typically have less diversity of butterfly species than larger islands,” Madden told her audience. “So this is excellent news, especially if we compare this to our larger neighbouring islands such as St. Maarten which has 36 species.”

Madden bases her study on data collected during her tenure at St. Eustatius National Parks STENAPA between 2009 and 2012.

Four different habitats were surveyed in the first four months of each year, using transects of 200 metres, and surveying for up to 1.5 hours per habitat.

All butterflies observed up to five metres from either side of the transect were counted and identified to family, genus and species level. Her findings were then compared to those recorded on adjacent islands.

Madden explained that some species, such as the zebra longwing (Heliconius charithonia), only live in the Quill crater, while others can be found in different areas of the island.

“Butterflies are an important indicator of the overall health of the local environment,” she stated. “It is important to continue monitoring these fascinating creatures in order to determine any long-term conservation measures necessary.”

During her presentation, Madden struck one voice of concern as to the increasing use of pesticides on the islands. St. Kitts and Nevis, for example, have fewer butterfly species than one might expect, and this could be the result of extensive agriculture, deforestation and the use of pesticides. Nevertheless, she remarked that additional studies were required to understand the factors governing butterfly distribution.

“The Caribbean offers fine opportunities to study island evolution,” she concluded. “And that has to embrace the soulful and wonderful world of butterflies.”