Home Local News Coalition Ministers all to come from UP, NA slates 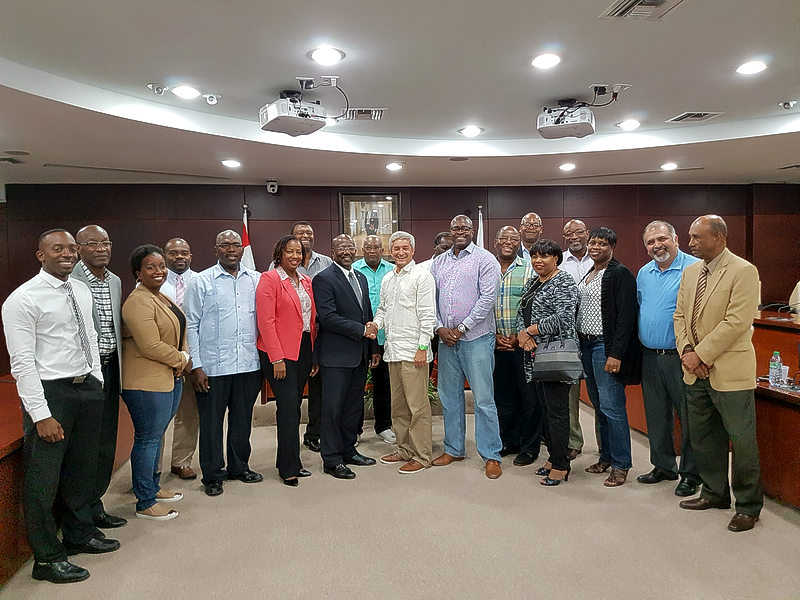 PHILIPSBURG–While two of the seven ministers for the incoming United People’s (UP) party and National Alliance (NA) coalition Government are already known, all of the other five will come from the two parties’ slates of candidates in the September 26 election.

Prime Minister William Marlin and Education Minister Silveria Jacobs (NA) are expected to stay on in their posts. No decision has yet been made by either party on who will fill the remaining posts in the Council of Ministers.
UP leader Member of Parliament (MP) Theo Heyliger and NA deputy leader Jacobs said at a joint press conference of the new coalition partners in Parliament House that ministers will come from the parties’ slates.
Much concern has been expressed in and out of political circles in the past about parties appointing outsiders who did not contest the election to Ministerial posts. The current cabinet has several examples of this as did past cabinets.
In the new Council of Ministers, NA will retain the Prime Minister’s post, the Finance Ministry and the Education Ministry. The party will gain the Ministry of Public Housing, Spatial Development, Environment and Infrastructure VROMI.
UP will be in charge of the Ministry of Tourism, Economic Affairs, Transport and Telecommunication (TEATT), the Justice Ministry, the Public Health Ministry, the Minister Plenipotentiary in The Hague and the post of Parliament Chairperson.
The parties are working out their priority plan to move the country forward. Marlin said the plan would be a blend of the two parties’ manifestos and other ideas that are workable for the community.
The press conference was called to present the new coalition, Marlin said. He referred to the photo of him, Heyliger, Jacobs and UP deputy leader Franklin Meyers taken after the Rice Hill Gardens Accord was signed early Tuesday morning, saying there had been “much speculation about these two parties coming together.”
The leaders and deputy leaders of the two parties were accompanied at the press conference by their parties’ current MPs and presumptive MPs based on the results of Monday’s Parliamentary election.
Both leaders said their parties and candidates firmly support the coalition and see it as the best option for the country. “People are sick and tired of instability,” said Marlin.
A strong point of the new coalition is that it has exactly a two-thirds majority in Parliament to enact change to legislation requiring this, said Marlin.
Heyliger said, “The people require stability” in Government. He described the negotiations with NA to come to the coalition agreement as “cordial discussions.” Both parties looked at the future of the country and the need to show maturity, put aside differences and find common ground for country, he said. He vowed “to make sure the coalition stays for full four years” at the helm of the country.
Both leaders informed Governor Eugene Holiday about the coalition agreement when they met with him separately on Wednesday. Marlin anticipates that the Governor will name a “formateur” for the new Government soon. Following that step, the process will commence of submitting the names of Minister candidates for justice and integrity screening by the justice and tax authorities.

Source: Daily Herald
Coalition Ministers all to come from UP, NA slates