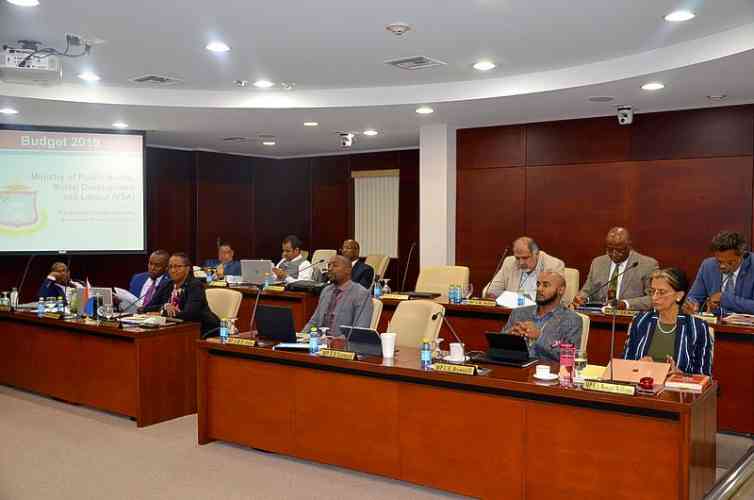 PHILIPSBURG–Members of the governing United Democrats/St. Maarten Christian Party (UD/SMCP) coalition voted down a motion by a member of the National Alliance (NA) to continue the debate on the draft 2019 budget on Friday night.

The debate got off the ground on Monday with the ministers making presentations on their various ministries, followed by Members of Parliament (MPs) making their comments and posing questions to the ministers. The questioning ended on Wednesday and ministers started answering the questions and subsequent clarifications on Thursday, continuing on Friday.

The last minister to present answers in the first round was Minister of Health, Labour and Social Affairs VSA Emil Lee, who did so late Friday followed by clarifications from Prime Minister Leona Romeo-Marlin.

Claude Peterson, who replaced Sarah Wescott-Williams as chairperson for the meeting as she took her seat as an MP to ask questions, then allowed two MPs to deliver their second round of questions and comments before moving to adjourn the meeting given the time, which was just before 9:00pm.

However, before the Chairperson could adjourn the meeting National Alliance (NA) MP Egbert Jurendy Doran made a point of order and tabled a proposal for the meeting to continue into the night until it had been concluded. Doran said the last thing he wanted to do was jeopardise the country’s autonomy as members of the Council of Ministers had indicated recently.

“I came here ready to debate this and have it handled today and I am sure many of my colleagues will agree. I propose go to a vote to continue the meeting until it is finished,” Doran said.

His proposal was immediately seconded and supported by a third MP.

Peterson then put the proposal to vote, which went along party lines with the eight members of the governing coalition voting against the meeting continuing on Friday and the seven opposition MPs voting for the meeting to continue.

NA MP Silveria Jacobs said she is as concerned as the Council of Ministers was a couple of weeks ago that the country is being placed in jeopardy if the budget is not approved. She said the meeting had been adjourned early the entire week and this was a concern to her. Jacobs wanted the record to show who is really putting the country in jeopardy with the meeting not continuing.

Peterson said the meeting will continue on Tuesday at 10:00am.